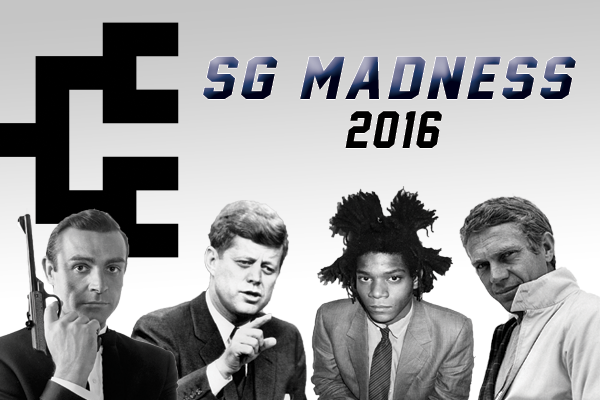 Last year, you whittled down our list of 64 of the world’s best-dressed men to name Daniel Craig – Mr. James Bond himself – the most stylish man of 2015.

This year, we’re back to do it again.

We decided to go with Rembert’s rules and retire winners as we go. Meaning, sorry Daniel Craig – you’re no longer eligible for SG Men’s Style Madness – and while we’re at it, Spectre really wasn’t very good. Sorry but it’s true.

This year we wanted to make things interesting here at SG HQ, so we’re doing our very own office pool, which I’m super excited about. Check out my picks, along with brackets from Brittany, Lizzie, Taylor, and Gabi at SGMadnessOfficePool.tumblr.com. Share your bracket and cheer on your picks using the hashtag #SGMadness on social.

Leave it to live wires

Relevancy is key to the selection process. If you weren’t in the news, on red carpets, or promoting a new movie, you’re not making the list. Justin Timberlake showed up at this year’s Golden Globes and Oscars parties…and that’s about it. Sure, he looked great at them, but that’s not enough to be considered a contender. Maybe next year.

We distributed the contenders into each region (themselves the same as last year – Kennedy, Basquiat, McQueen, and Bond) at random, then ranked them according to their respective social media followings. The larger the fan base, the higher the seed. For competitors without a social media presence (gasp), we eyeballed it. Sorry not sorry.

Our picks are, we are happy to admit, purely subjective. We got the SG brain trust in one room and threw out the best, most interesting, style that got us talking in the last twelve months. We pulled our picks from actors to singers to celebrities we can’t quite name why they’re famous to politicians and famous names in business for a well-rounded list of the most stylish men around the globe (but, ahem, mostly America). 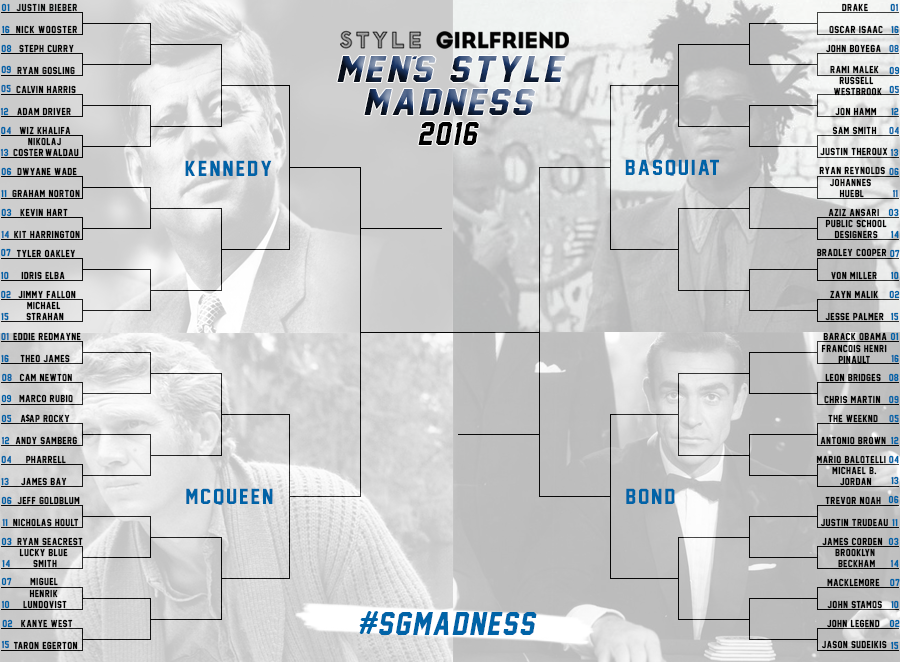 {Ready to fill out your own? Get our 2016 Men’s Style Madness bracket}

Look at all the stats

Contenders are best judged by the breadth of their style this year, and not solely on the outfits we post. Sure, we’ve chosen looks that show off different aspects of each guy’s style, but that’s not to say we saw every TMZ shot of him wearing a fresh pair of sneakers – and we encourage you guys to keep those shots in mind too.

You guys ready for an industry whistle blow? Celebs don’t generally style themselves for magazine spreads or photoshoots. Glass shatters, illusions swept off the floor. You’ll see we tried to stick to outfits that the contenders themselves had a hand in styling because that shows their personal style…and not what GQ’s personal stylist said to wear.

Voting is easy – no sign-in required. Get your pick in by 11:59pm the day a match up goes live before voting closes.

The best way to make a case for your picks each day…sound off in the comments. Results are controlled only through voting and your comment just may be what sways a new vote.

Who are you voting for to go all the way?

Share your own SG Madness bracket with us on Twitter and Facebook. And! Be on the look out for Team SG’s brackets because we’re having are own headquarters challenge (let the smack talking begin)…