How to Propose: A Guy's Guide to Everything but the Ring
Skip to content

Engagement 101: How to Propose

Engagement 101: How to Propose
Jumbotron not required 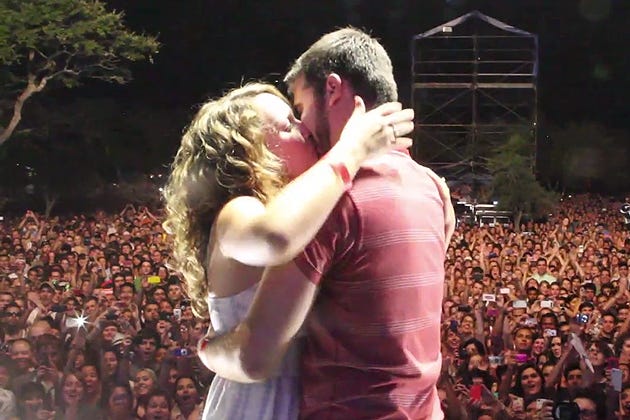 I’ve covered the ring (refresher: Diamond, probably, but not necessarily; vintage, maybe yes! And check Pinterest for her wish list).

Let’s talk about how to propose to the love of your life.

I mean, you could do it what the couple above did: You could tweet your favorite band (Foster the People, in this case) and get them to let you propose on stage, right before they play your favorite song. Yes. This is an example from a very specific era. But there’s more then one way to propose—and going viral isn’t a requirement.

The what of proposing

In fact, I’m begging men everywhere to consider this point strongly—not, like, as strongly as whether or not she’ll say yes, but as you consider the moment, resist the impulse to add literal choreography.

I mean, OK, I’m 100 years old. But I’ve seen my friends unnecessarily freak out because they either couldn’t, or just didn’t actually want to, come up with a proposal about to go viral. (I want to stress that this came from a good place—they wanted the best for their girlfriends, and somehow “best” and “popular on Facebook” got conflated.)

So I say to you, as I said to them: Forget it. Your girlfriend doesn’t care, unless she’s a social media manager, in which case—sure, go ahead and get her a raise.

But for the other 99.99% of you, don’t be intimidated by other people’s high-concept engagements, and don’t worry about the resulting Facebook likes. I promise: They don’t make the actual marriage any better.

The How of Proposing

I’m backing myself into a bigger point—in fact, the biggest point. The engagement is about her. That’s not retrograde thinking—that’s just being awesome. You may have dreamed of proposing via Jumbotron—but if she’s happiest 100 miles from the nearest athletic facility, you probably want to take that into consideration. Here’s another common engagement dilemma that can be solved with this simple idea.

Here are some ideas of the wrong follow-up questions:

Here’s the right question (plus a follow-up): Does she want me to? Would she find it charming and in line with her values, rather than creepy and paternalistic?

More important: Is, in fact, her father the best person to ask? Maybe the best person is her mom, or her brother, or the grandparents who raised her. My best friend’s boyfriend asked me and her older brother before proposing because her dad is a piece of sh*t who left when she was young and barely keeps up with his “former” family now that he’s got a new one. We grow up with all kinds of ideas about proposals, and some of them haven’t kept up with the reality of life in 2014.

The When of proposing

This is my favorite area of discussion, because it’s the one I see my friends screw up most. Take my friend J, who took his then-girlfriend to Paris for a super-romantic weekend.

She was pretty sure he was going to ask—but he just kept putting it off, until she thought he’d changed his mind. He asked her literally while walking back from the restaurant their last night there. It all worked out, but if he’d kept to his schedule, he would have asked her the first night, and they would have had an amazingly romantic trip to Paris.

As it happened, they both spent most of the time nauseated—J because he couldn’t get his act together and his GF (now wife, thank goodness) because she thought he’d changed his mind.

The where of proposing

Again: It doesn’t have to be center-stage at a Foster the People show.

Maybe home is too far on the other end of the spectrum. But neither does it have to be the stock-standard fancy restaurant—especially one where you don’t have a history, which you’ve chosen just because it feels “grown up.”

Make a list of the five places where you’ve already had a terrific time. Chances are, the best place to ask is one of those.

The Who of proposing

You know this already. You’ll also want to consider whether she would be excited to share the moment with her nearest and dearest—maybe yes, maybe no.

Some families love to be there for occasions like this; others are naturally more private. This falls under “things you can ask her because you don’t actually fail at engagements if the whole thing isn’t entirely a surprise.”

The why of proposing

A lifetime of happiness, or thereabouts.

For the ring-centric part one, look here.