"You Go, Glen Coco!" Learning How to Be Happy for Other People - Style Girlfriend
Skip to content

“You Go, Glen Coco!” Learning How to Be Happy for Other People

“You Go, Glen Coco!” Learning How to Be Happy for Other People
On feeling affirmed by others' success 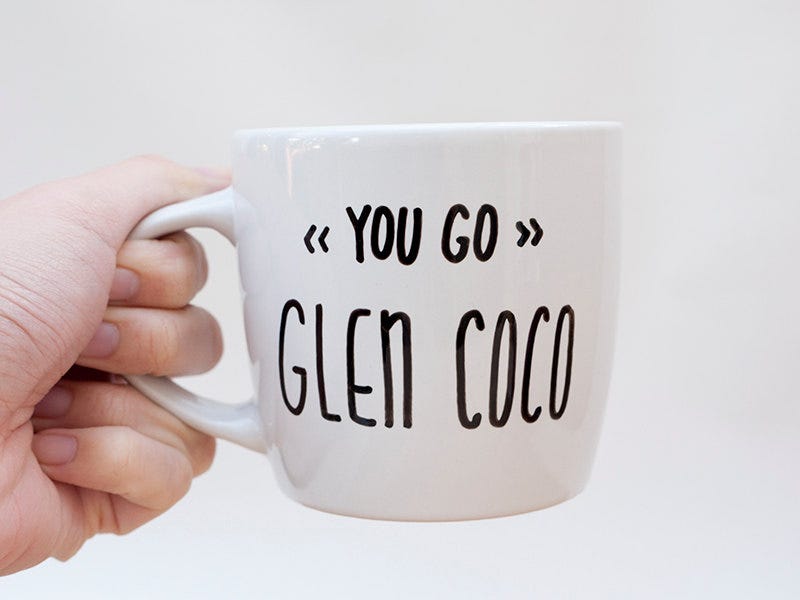 October 3rd has become known by those who regularly use teen comedies from the 1990’s to communicate their feelings as “Mean Girls Day.”

Do you remember Mean Girls?

Of course you do. It plays on E! whenever they’re not running a Keeping Up with the Kardashians marathon (which, to be fair, is like 95% of the time). It’s one of those films that holds up, like Tommy Boy, or Clueless, giving today’s middle and high school so our children grow up with a sense of history. After all, if you don’t learn from the past, you’re doomed to repeat it, right?

If you’ve somehow managed to escape it, Lindsay Lohan-in-her-prime transfers to a high school in Michigan (Michigan? somewhere like that) after spending most of her formative years in Africa, where her parents were researchers. She learns about cliques and how to navigate her way through the adolescent social system. I’m sure I’m not doing it justice; it’s very good! Tina Fey’s even made a musical out of it! If you have actively avoided it, I ask you, why?

There’s plenty of famous lines, some that your friends or girlfriend probably repeat on the regular. “Stop trying to make ‘fetch’ happen. It’s not going to happen” is a particular favorite of mine.

One throwaway phrase that’s become—and I don’t want to overstate it, but—completely and totally iconic is when a Santa Claus suit-sporting character interrupts a class to hand out candy cane-grams, calling out students’ names and dropping them on their desks as he goes.

“Taylor Zimmermann, two for you. Glenn Coco? FOUR for you, Glenn Coco! You go, Glen Coco!”

I don’t think you even get to even see the aforementioned Mr. Coco. If you can, I can’t conjure up an image in my head of him.

That is to say, he’s not an important character, and yet one of the most enduring lines from the movie remains all about him. Why? Maybe because student Santa sounds so happy for him. Not jealous, not wistful. Just happy.

Something I have had to learn for a multitude of reasons is how to be happy for other people when maybe you’re not so happy with yourself.

So I think often of Glen Coco when I’m able to break through my “Life is a zero-sum game” mindset and truly relish other people’s success, both personally and professionally.

I’d like to think Glen Coco has a stellar personality and friends who love him. He might not be the Homecoming king or most popular guy in school, but if anything, that’s what makes him easy to like, and the reason he’s getting all that sweet Christmas candy. He’s probably the kind of kid you would hang out with on a Friday night playing Madden in his parents’ basement even if there were a cooler party to go to.

There’s so few famous Meg(h)an’s out there who’ve really made a splash, that when Meghan Markle, of Suits…well, “fame” might be the wrong word…but relatively well known-ness (?) started dating Prince Harry, I was really happy for her. Then when she landed the Vanity Fair cover last month, with the understanding that this probably preceded an engagement announcement? I was straight-up psyched for her.

And not just because she’s about to become a real-life, honest-to-goodness princess, though that’s very cool. Or maybe she just gets to be a duchess? I’m not really up on royal family stuff.

At the end of the day, there are plenty of reasons to root for someone, and plenty probably not to. I’m working on being someone whose default is to root for others, not against them.

Have I ever seen Suits? No. Will I be invited to the eventual royal wedding? No, but I appreciate Meghan Markle opening up the world stage to Meg(h)an’s.

Maybe it’s because representation matters. And we want to think that, sometimes, at least, the people like us win.

We want to see ourselves reflected in the world (hello-o-o-o success of Wonder Woman, much?). And for me, I guess the thinking goes, If this plucky American brunette can go from a cable soap opera to marrying a f*#cking prince, well by god, maybe I can make something of myself, too!

Because it’s cool to see a Meg(h)an take center stage! Who else has carried the torch for Megans? Meg(h)an Trainor, maybe? I guess? But I am, in fact, not all about that bass. And from what I’ve read about Markle, she seems Glen Coco-levels of sweet. I’m happy for her as a Meg(h)an

For me, I deal so often with feelings of jealousy—They’re farther along in their career; they’re already on their third baby; ugh, their hair is so much bouncier than mine—that being happy for someone without feeling accompanying pangs of “Why can’t I have that too?” are (too) rare and I suppose I just think it’s worth celebrating them.

Whether you’re a “nice guy” or a woman, or a person of color, or a Megan(!), or one of a zillion other factions that don’t often see themselves in the spotlight, it feels good to feel represented. To feel adjacent to the success of someone you feel kinship with in some way can give you the boost you need to keep going.

Perhaps you’re a ginger and feel happy for that guy from Homeland because there’s not that many of you in the spotlight (lol, I am trying so hard not to make a joke about how it’s probably because you burn in the sun). Or maybe you’re on the shorter side and seeing Chrissy Teigen happily tower over John Legend on the red carpet gives you all the feels. Or you’re a “nerd” who was as surprised as any of us to see Jeff Bezos start showing up to summits looking jacked. Why? Because maybe you don’t have an Emmy or a supermodel wife, but seeing it’s possible means now you know you could. You could.

HOW DO YOU MAKE HAPPINESS FOR OTHERS A PRIORITY FOR YOURSELF?

>> Want more from SG founder Megan Collins? You got it