Megan left the country rather than having to opine on Katy Perry and Riff Raff dressing up as Justin and Britney because she’s SO OLD.

Despite my shock that 1D was not only not nominated, but also didn’t even attend, the VMAs were something to behold. Jay Pharoah stole the show (IMHO) with his  hip-hop heavy-hitter impersonations; every female performer chose to wear outfits between “hot pants” and “no pants”; and Miley was dressed (relatively) demure AND did a good thing.

But when it comes down to it, the VMAs are about Moon Men (not to be confused with Moomin), and funky New York style dressing that isn’t your standard red carpet fare.

Without further ado, here are our nominations for best dressed:

Jack Antonoff was a breath of fresh air in the red carpet pictures because I actually knew 1) his significance (Fun! Bleachers!)  and 2) his significant other WITHOUT asking my VMA-viewing companion, Google. Jack shows you can look just as good dressed as yourself, and forgo the stage clothes or excessive mewelry. Argyle socks, ankle exposure and a teal blazer are all things you can incorporate into your daily wear. 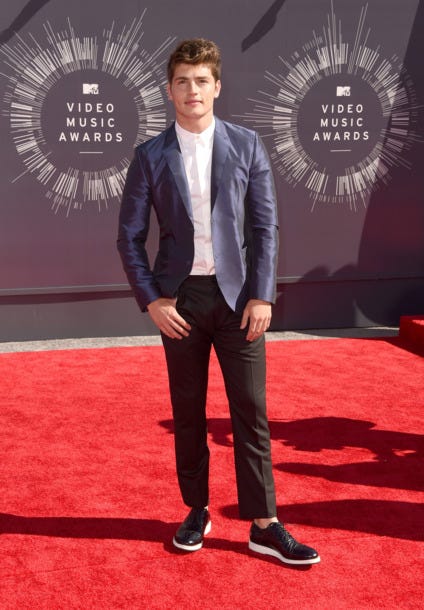 Gregg, I actually *did* know who you were upon Googling, but totally did not recognize any Wizards of Waverly Place under all of that style and confidence you were rocking! That is a beautifully cut, midnight blue satin jacket, a very covetable pair of shoes that I would like for myself and a hair swoop with the perfect level of formality, in case you were wondering.

I’ve never met a shawl collar jacket that I didn’t like, and Jay’s midnight blue number is no exception. The suit and tee look can be tricky, but Jay proves that – with the right fit – it has perfect outfit potential. The hat, gold chains and baby show the guy knows how to accessorize, but he doesn’t go overboard.  Also, his white tee perfectly reflects all of Bey’s queenly sparkliness. 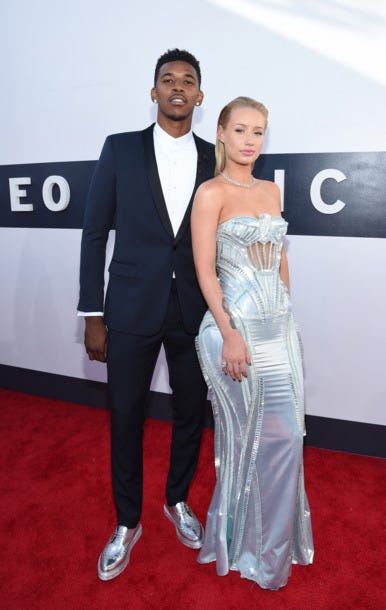 I’m sorry, Nick Young, but I had to Google you. For those of you who didn’t know, Nick Young is a red carpet fashion maverick and also a professional basketball player. While the invisible tie and midnight blue suit are both popular red carpet picks as of late, it’s the impeccable tailoring and Moon-Man-worthy shoes that seal the deal on his name being inside the envelope that I open announcing my favorite look from the 2014 VMAs. Seriously though, I don’t see a single wrinkle or scuff on this guy – he should lend his clearly magical iron to Ed Sheeran (who at least gets a mention for wearing a polka dot button up, even it was all wrinkly).

Who do you think rocked it on the red carpet?

And don’t forget to follow Megan on Instagram for pics from her trip this week to southern France!