Sorry Not Sorry
Is it too late now to say sorry...for apologizing so much? 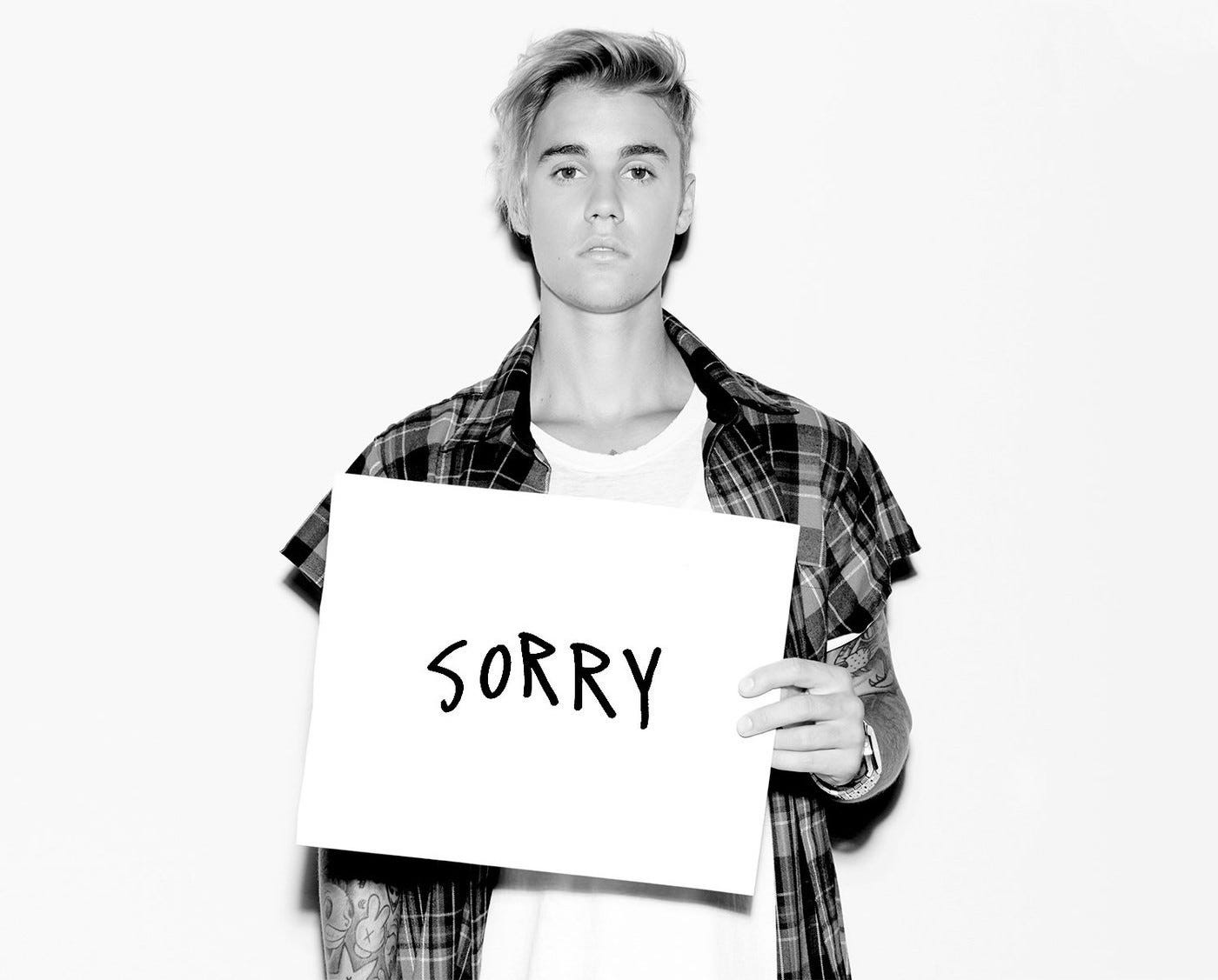 According to recent studies, the only man in America saying “Sorry” these days is Justin Bieber.

Women, though? Women apologize a lot. Like, for everything. If it’s raining, and you didn’t think to bring an umbrella. When our burger comes out medium-rare but we had ordered the chicken. When we speak up in a meeting.

Why? It seems to come down to perception. “With men, we listen for what they’re saying, their point, their assertions. Which is what all of us want others to do when we speak,” says Robin Lakoff, a professor at UC Berkley. “With women, we tend to listen to how they’re talking, the words they use, what they emphasize, whether they smile.”

Which is why so many women feel the need to demur, to apologize, to “I’m not trying be a bitch, but…” before putting themselves out there. We’re trying to hug the line between being heard, and somehow being heard shouting (even when we’re not).

In my very last role in advertising, my boss’s boss said something that I’ve carried with me ever since, and if I do anything right as a leader/mentor/friend/nosy neighbor, it will be to pass along this wisdom to the women around me.

She pulled me aside after a particularly deflating regroup with our creative team. They’d just finished dumping all over me for the client feedback I’d relayed. Feedback I’d fought on their behalf – a fight I’d ultimately lost…though honestly, if their proposal had stayed within the agreed-upon boundaries of the scope of work, we probably wouldn’t have had a problem in the first place.

I apologized, more than once, to the frustrated group. “Sorry guys, I know it sucks.” The team was mad they would have to work over the weekend (so would I).

“Don’t ever apologize to someone for something that’s not your fault,” she told me when we left the meeting. “Because then they get to believe it really is.”

But women apologize way too often for things that are not our fault, and they end up reinforcing our wrongness in the whole affair. “I’m sorry the rain ruined our picnic.” “I’m sorry the concert tickets sold out.” (If only this Inside Amy Schumer sketch were an exaggeration of this tendency).

Catch up on last month’s letter from the editor.

Earlier this year, it seemed you couldn’t open a magazine or newspaper (or rather, turn on a smartphone or tablet) without encountering a headline about the state of women’s communication skills in 2016. Namely, these articles focused on how women need to either 1) change the way they speak, or 2) how everyone else (ie, men) need to change the way they listen.

Some writers made the argument my boss did – that women would do well to foster a stronger sense of confidence in asserting themselves. Others focused in on the speech patterns themselves, encouraging women to speak more like men, rid themselves of “vocal fry” (picture any Kardashian speaking and you’ve got it) and “upspeak” (like, when you say a statement? But it sounds like a question?) in order to be taken more seriously.

Then came the round of opposition think pieces that posited women should throw this advice out the window, and speak how they speak, feel how they feel, and leave it up to everyone else (cough*men*cough) to self-monitor their own perception filters of what a woman should say, or how she should sound.

As Jessica Grose of the Washington Post wrote, “Women are trapped in a double bind when it comes to expressing themselves at the office — they’re seen as weak if they speak in a “feminine” way but as domineering and even crazy if they speak in a “masculine” way.”

Personally, I fall somewhere in the middle. As a woman in business I’m keenly aware of presentation, and as a professional people observer, I understand that making the first impression a good one goes a long way. And whether or not I think someone’s opinion of me is fair, I can’t get inside that person’s head and implant the impression I want them to have.

So to the extent I want you to like me, or respect me, or do what I freaking say because I’m right and you’re wrong, I have to play the communication compromise game. We all do.

Which is why, I’ll try to get rid of my “likes” and maybe, like, a little bit of upspeak? But I have mostly cleared my vocabulary of “I’m sorry.”

So why am I preaching to the choir? Of course there’s men out there who fall into these same communication patterns (this article argues men upspeak just as much as women, we just don’t notice it), but the vast majority of you don’t have a problem with apologizing too much.

What you can do is put your apology antenna up. A level of awareness is key to achieving better communication between the sexes. Maybe you’ve never thought about how female co-workers start their sentences with “This might be dumb, but…” in meetings. You might now.

At home, have you ever let your wife or girlfriend take the fall for circumstances outside her control, or maybe that the two of you actually shared blame for?

So what to do. First off: if you’re accepting apologies you don’t deserve, stop. And if you’re saying sorry when you shouldn’t, consider this alternate strategy:

Say thank you instead.

Sounds easy but of course it’s not. I struggle with it every day. I’ve always keenly felt my place in life: in middle school, when I was popular but not that popular. When I first started writing – about menswear and at all – and knew that I was looking in at the party from a window. Now, when working on a new venture and feeling, all over again, like the new kid on the block, like I can never read enough books on startups, or churn through Fast Company articles on entrepreneurship at a fast enough clip.

And my inclination is to apologize. For my ignorance. For taking up space at startup networking events. I’m sorry I don’t know more about financial projections. I’m sorry this deck contains so few marketing jargon buzzwords.

But I’m not sorry. I’m not perfect, but I’m trying. I’m doing my best.

HAVE YOU BEEN GUILTY OF ACCEPTING APOLOGIES WHEN YOU DON’T DESERVE THEM? SOUND OFF IN THE COMMENTS BELOW

Sign up for the the Style Girlfriend newsletter, and get stylish tips and shopping picks delivered right to your inbox.