Steal His Look: Robert Redford in All the President’s Men

Steal His Look: Robert Redford in All the President’s Men
Watch for the historical echoes, stay for the style! 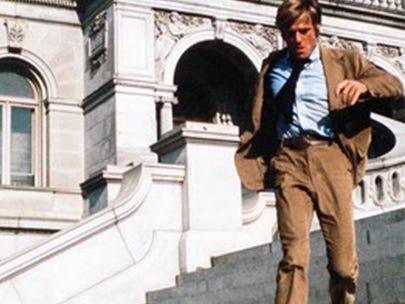 Lately, it seems everything old is new again. Y’know, like corruption at the highest levels of our government!

The movie, dubbed, “the most devastating detective story of this century,” certainly brings up some unsettling parallels to our current political climate. What else is devastating? Robert Redford’s smokin’ style. (Ed. note: How’s that for a hairpin turn segue??)

Redford plays WP journo Bob Woodward, who, along with his partner Carl Bernstein (a boyishly handsome Dustin Hoffman), uncovers a break-in at the Democratic Party National headquarters right before the 1972 election.

While both nail the rakish, “Oh, this ol’ thing?” lived-in American sportswear wardrobe vibe later immortalized in The Official Preppy Handbook, it’s Redford whose style star shines brightest in the film. The standout? A corduroy suit I want to cut open and live inside, like Leo and that bear in The Revenant.

Now grab your notebooks and take some notes, SG cub reporters, because this is a look you won’t want to forget.

Below, how to dress like Robert Redford in All The President’s Men: