Vote in SG Madness 2019: Fashion-Forward Celebrities Bracket
Let's do this! 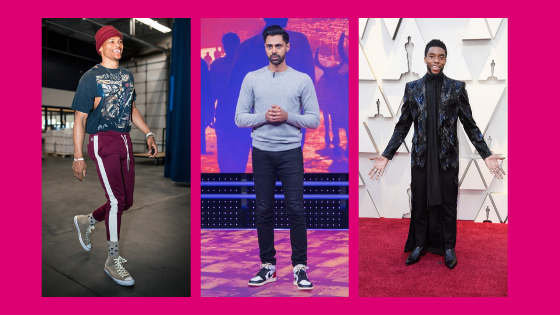 Here we go, guys. It’s time to choose your best-dressed man of 2019. You’ll notice we’re switching things up this year: to keep things apples to apples (as opposed to Bieber to Beto), we’ve grouped this first heat with the most fashion-forward celebrities of the year. Do you prefer Hasan Minhaj’s sneaker style to Jonah Hill’s? Pharrell’s black tie camo to Dan Levy’s jacquard? Make your voice heard by voting below.

Below, choose your favorite fashion-forward celebrities to face off in the next round of SG Madness 2019:

Even if I never see the movies Sam Rockwell is in (sorry Three Billboards and Vice…maybe the next time I’m on a seriously long plane ride?), I always pay attention to the press tours. Because he inevitably winds up dancing his way through the interview circuit in cool outfits like the Gucci bowling shirt he wore in 2018 to the Palm Springs International Film Festival, above.

While rapper Travis Scott is probably best known for his relationship with self-made billionaire Kylie Jenner, don’t sleep on his mash-up style. He’s not afraid to mix genres and make statements with his clothes. Far from Sicko Mode, indeed.

It was very hard to find a photo of Giants wide receiver Sterling Shepard without his wife, supermodel Chanel Iman, but we had to try because honestly it wouldn’t be fair to the other contestants. Shepard, though, consistently brings his own A-game to fancy events and parking lots everywhere (seriously, I want that Slayer sweatshirt pretty bad), earning him a spot in this year’s most fashion-forward celebrities bracket.

The Jonas Brothers, on the other hand, have re-emerged with a new single and a new, swerve-y style that we can’t ignore. It seemed only right to group them as a trio for this year’s SG Madness, especially with that “Sucker” cover art, which you know they had to convince Kevin of, so it really does seem like a group effort in 2019.

Honestly, this one’s going to be tough. It’s a bit like that scene in The Devil Wears Prada where the assistant holds up two blue belts and the room gets uneasy trying to decide because “they’re so different.”

While we’d argue that Jonah Hill is the more fashion forward celeb in this face-off, it sort of depends on how “out there” you’re looking for from your celebrity inspiration. Because sometimes he goes so far as to be, well, confusing.

Patriot Act‘s Hasan Minhaj, on the other hand, might be more predictable but his style is also probably more wearable.

What like we weren’t going to use the harness outfit? Chalamet had a bit of a bummer of a year, turning in two great performances with like, zero critical attention for it (seriously, see Beautiful Boy but not on a plane because you will cry). Good thing he still got invited to awards shows, though, because then he could turn up in more sort-of-bonkers-but-maybe-he-pulls-it-off outfits like the sequined Louis Vuitton harness he wore to the Golden Globes, above?

Justin Bieber had a better year (maybe? He also seemed to cry in public a lot). Bieber also got married (congrats!) and couldn’t stop turning the walk from his SUV to his hotel, and back again, looking weirdly fly as hell. He helped lead what’s been coined the “sleazy” style movement, and honestly, our team doesn’t know that everyone can pull it off, but we’re all pretty much agreed that the Biebs definitely can.

This match-up should be interesting, especially if any intense BTS* fans find our l’il tourney…oh, who are we kidding? They’re all intense.

The eclectic K-pop group will soon be further encroaching on Pete Davidson’s territory; they’ll be the musical guest(s) on SNL in April. By then, we’ll know whose off-kilter style you prefer of this fashion face-off.

*Also, yes, that’s not all of BTS’s members. Sorry, they didn’t fit in the image frame! If they move on to the next round, we’ll figure it out. Promise.

Okay, so, no one on our team really “got” Chadwick Boseman’s Oscars look (above) this year, but it seemed like a statement he obviously wanted to make, and that’s why we’re including it here.

Lakeith Stanfield, on the other hand, seems like a naturally-occurring, walking statement. And that’s why the Get Out and Sorry to Bother You actor made his first SG Madness appearance this year. He’s a natural fit for our fashion-forward celebrities bracket, and no matter how far he goes, we’re looking forward to seeing what he does (and wears) next.

Look, could we have told you who Dan Levy was or how he dressed this time last year? No, of course not, and that’s the beauty of SG Madness. Fresh talent is always welcome!

Everyone on our team became obsessed with Schitt’s Creek in, oh, the past thirty days? And it’s fun to see that creator, showrunner, and star Levy gets the details right off-camera, too. He’s been a celebrity in Canada for awhile now, so it makes sense he looks like a vet on the red carpet.

But is he a match for Pharrell? TBD…

This is when the random generator program we use makes it seem like the style gods are toying with us. A LeBron-Westbrook face-off so soon? No fair!

Both NBA players know how to turn the walk to the locker room into their own personal runway, and man, do they show up ready to strut.

Really, it just comes down to whose personal style you prefer. So, who’s it gonna be?

Vote in these first eight match-ups above, before Saturday, March 23! And don’t forget to weigh in on the Fancy, Classic, and Committed bracket face-offs as we roll them out this week.