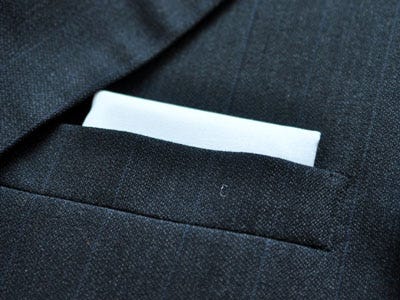 Men’s style is like NASCAR: the difference between the good and great is often found in the smallest of margins. It’s the little touches here and there that take a look from simply “appropriate” to spectacular – small things like the right belt, a nice watch, and a crisp pocket square. In this guide, we’ll celebrate the unsung hero that is the white cotton pocket square and give you tips on when and how to wear one.

How to Wear It

Why it’s an essential

Pocket squares, or handkerchiefs, were used regularly during ancient Greek and Roman times for the same functional reasons we use them today. In the Middle Ages, they were used primarily as head covers, coining the name “kerchief.” “Handkerchiefs” then, is a combination of French words: couvrir, which means “to cover,” and chef, which means “head.”

The origin of the pocket square stuffed in sport coats around the world today comes from men using handkerchiefs as a pre-Kleenex sneezing solution and simply needing a place to put them. For ease, the breast pocket was an obvious choice and shifted from function to fashion over the years.

Much like tieing a tie, you only need to know 2 folds: the Presidential fold and the Cooper fold. The Presidential is simply folding other the right angles of the pocket square to make a rectangle that fits into your jacket pocket.

The Cooper, named after actor Gary Cooper, is essentially the opposite. The Cooper is loosely folding and shaping a rounded puff, with no edges, that peaks out gently from the jacket pocket. With both of these folds, you should show somewhere between a half to a full inch. Anything more would be uncivilized.

WHAT’S THE UNSUNG HERO OF YOUR WARDROBE?