Workout 101: A Guy’s Guide to Barre Class
Pssst, it's harder than it looks 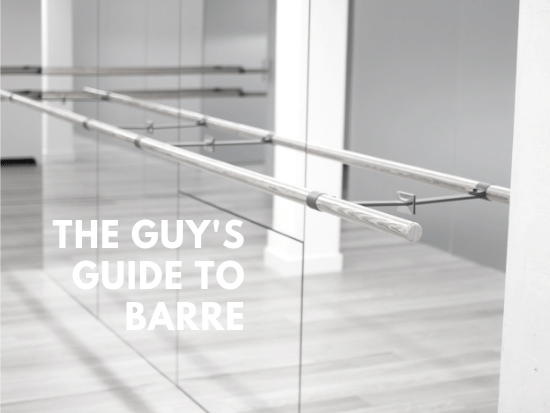 When it comes to confidence, there’s plenty of places a guy can start. For some, it begins with a wardrobe overhaul. For others, it’s tackling a new fitness routine. At SG HQ, we’ve found some guys are reluctant (but curious!) about gym classes. If that’s you, check out #SGapproved fitness activities in our Workout 101 series. Next up? A guide to barre for guys…

True story: Of all of these Workout 101 posts — from Pilates to spin and everything in between — barre class might be my favorite.

I swear, walk by a barre class and you might think you were looking at a couple dozen women standing in front of a mirrored wall checking out their hair. That old chestnut is true, though: Barre will make you hurt in muscles you didn’t know you have. It offers some of the flexibility and balance of yoga without the chanting, some of the core strength of Pilates without overdosing on equipment (and it’s usually a little cheaper, since the class size is bigger).

“Most guys lift weights. Weight training builds the shoulders, arms, back, chest, and legs—exercises that are not necessarily focused on strengthening the core. This added muscle mass limits overall flexibility as well. Barre will increase overall flexibility and core strength, which are key to injury prevention.”

The barre workout offers up the flexibility and balance of yoga without the chanting, the core strength of Pilates without overdosing on equipment, and the lean muscle definition of a more traditional weights workout. Best of all worlds? I think so. You might, too.

Interested? Check out this guide to barre for guys:

What is barre class, anyway?

As the name suggests, a ballet barre is involved, but beyond that barre classes are often a hodgepodge of moves from dance, yoga, and Pilates. Props, including light hand weights, balls and bands, often make an appearance.

Generally, if there are cardio segments, they come at the beginning of the class, and they’re often pretty brief — more of a warm-up for cold muscles than a proper fat-burning session. This is usually followed by an upper-body workout with the hand weights, a lower-body workout at the barre (plié power!) and, finally, a focus on the abdominal or core area on the floor. Barre is meant to get you super-toned by targeting hard-to-reach muscles. It’s not going to win anybody a body building prize, but it’ll get you fit.

What it isn’t is probably as important as what it is: It’s not a dance class. “[Guys] will think it’s going to be a ballet or dance class,” says Allen. “Many men I talk to think it’s a class designed specifically for women—that it’s not going to give them the type of results they want or that it won’t be enough of a challenge.”

I’ve taken a lot of barre classes, and I’ve seen exactly one guy in any of them.

In my experience, barre shares a lot of its moves with yoga, but not its philosophy — so if you find the vibe at your neighborhood yoga studio a bit too crunchy, you might be more interested in barre. Anecdotally, I can say that my yoga classes draw from all corners and industries, while my favorite barre classes attract a more hardcore type, who come from industries to match (finance, law, business — not so many vegan smoothie experts here.) If that sounds like your type of lady, you’re never going to find a higher concentration of cool, driven, super-fit women than at a barre class.

What guys should wear to a barre class

Wear comfortable clothing – nothing too loose or baggy as the teacher is best able to give feedback on technique when he or she can actually see your body. The movements are really small (think: an inch up, then down….over and over and over), so seeing your form even just in the mirrors is helpful.

The only thing you really need that you might not have yet are grippy socks, which will run you around ten bucks.

Surprisingly high. One of the main points of barre class is that it hits muscles that are difficult to tone through other workouts. This means that your biceps, triceps, and other showcase muscles might not feel so super worked out here, but some previously untaxed muscles in your core or back might become newly apparent.

“[Barre] works the smaller, more ‘intricate’ muscles throughout the body, which will help develop more muscle control and better coordination,” Allen says. “It’s great for guys who play sports like golf or tennis, which require a little more physical finesse.”

This can mean that there’s a lot of fiddle-y fine-tuning before you’re in the required position—but once you get there, you’ll understand what all the hassle was about. “I think some of the positions in certain exercises can be challenging for the male body,” Allen says. ” Our hips, shoulders, and hamstrings don’t really find some positions with as much ease as our female counterparts. A good instructor can help you here.”

Probably not necessary, though many barre studios have showers, so you’re covered in case you do work up a sweat.

What guys should wear to a barre class

How hard is barre, really?

You won’t die. You won’t feel like you’re about to die. And it’s not a “going to the gun show” kind of workout. But the next day? That’s another story. Expect a surprising amount of stiff muscles after the first, say, 10 sessions

But I promise that if you stay with it, you’ll develop greater balance, flexibility, and all-over strength — and be surrounded by around 30 super-motivated women while doing it. “

Guys have a difficult time letting go of the idea that heavy weights and big, ballistic movements are essential to working out,” Allen says. ” You ask them to take two-pound weights and they laugh … until their arms are on fire and they can’t hold them up about halfway through class.”

If you’re ready to overhaul not just your workout routine but your wardrobe, too, Style Girlfriend can help! Let a member of Team SG put together a personalized shopping plan just for you, your budget, and your body type. Learn more >﻿