Style in Real Life: Peter Cortez
This creative director knows his way around a clothing store (and a kitchen) 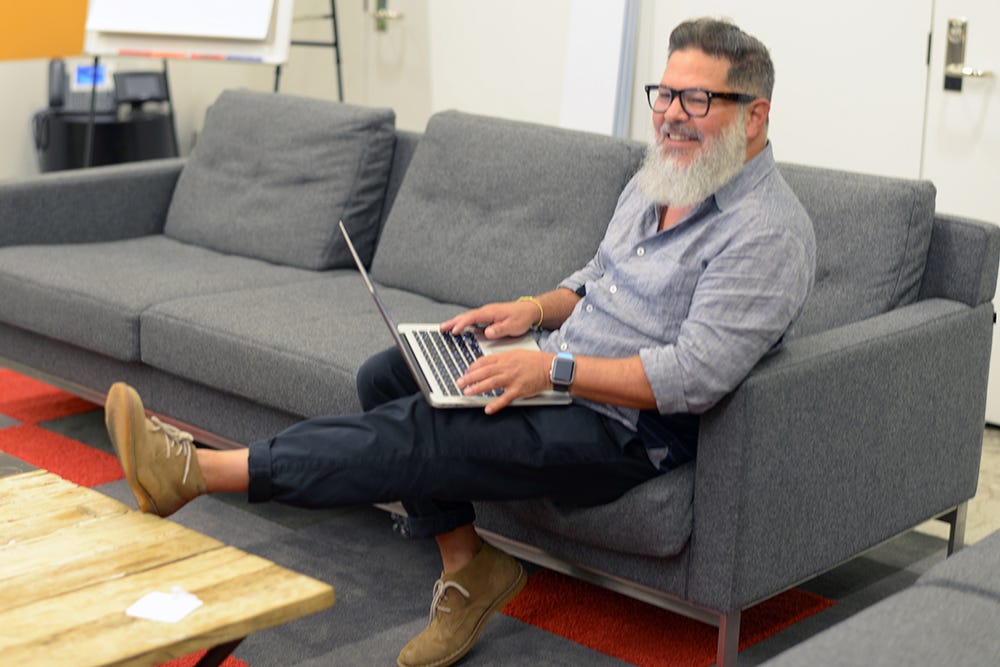 No easy feat in New York City, but the Brooklyn-based freelance creative director knows how to make the most of the modest kitchen and patio space in his Williamsburg apartment. A “foodie” in the best sense of the word, he’s the kind of guy who owns six different kinds of salts (and uses all of them) and says, “Sure, the more the merrier” when you ask if you can bring a friend along.

He’s also got a great sense of style, with both a closet – and beard – that won’t quit.

Style Girlfriend talked with Cortez about growing up in California with east coast roots, how he shops, and the challenge of adopting an “ad guy uniform.” 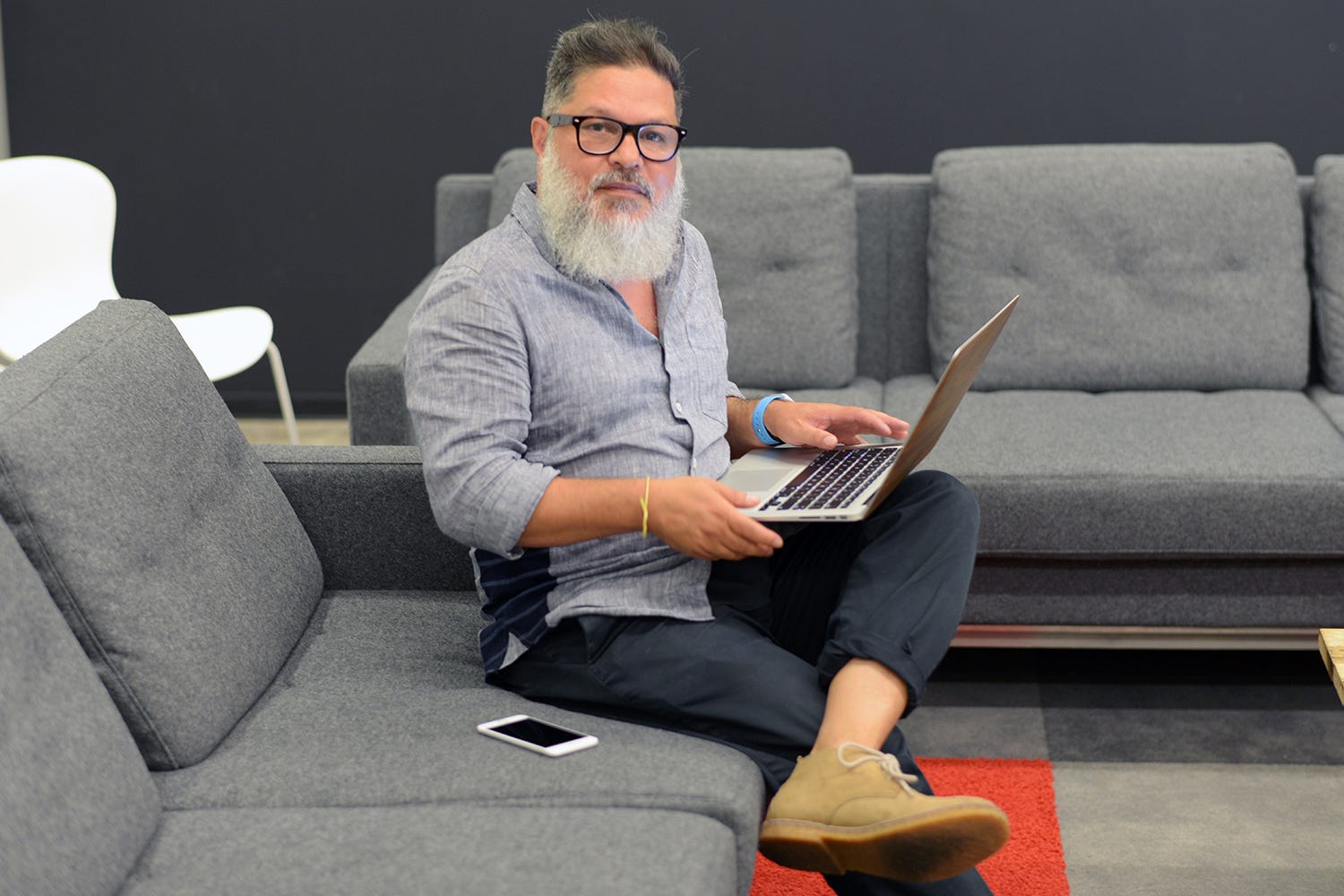 {Cortez is wearing Hush Puppies Desert II in taupe suede. Get it here}

“…I was born in New York, at Beth Israel in the East Village. We moved when I was 2 or 3, and I grew up in Santa Barbara. I remember summers in Queens, in Forest Hills with my grandparents. We stayed almost all summer. I only stopped when I got to high school. I played football so the two-a-days meant I couldn’t leave.”

Did you dress differently than the kids in Queens?

You and I both know that when you’re starting out in advertising, the money’s not…great. You don’t necessarily have the financial freedom to buy a rack of lamb to make for dinner, or the fancy brand name jeans you may want. How did you deal with that?

There was a long time when I was on a budget-budget, and going to the market I’d buy my noodles, tofu, spices…and find cheap, creative ways to make it new and interesting every night. And it was good! But I don’t miss those days.

Right. In some ways, having restraints can actually goose your creativity. That’s what I like about the idea of a uniform. Parameters can be helpful, whether externally imposed or internally.

My old boss used to say, “Give me the freedom of a tight brief.”

And it’s the same way in life. If you don’t have disposable income, you’re limited in how you’re able to shop, eat, etc. But it doesn’t change your point of view. Your instincts are what they are, even if you have less to work with.

How has your style evolved through the years?

Last time I was back in California, my dad showed my friends pictures of me in the 90s. Everything was baggy, suits with pleats and everything. It was like, “Oh yeah, that was the style. I wouldn’t wear that in a million years today.”

But that’s…being alive. The world is changing around you and you are going to change with it. It doesn’t mean you have to change your style completely, but there’s new things, and out of those new things; what are the things you like, that can grow and develop your style? That’s how I look at it.

How you dress, the car you drive, the magazines you like to read…it doesn’t define who you are, but it is PART of who you are, because it’s an expression of things you like.

What’s the best style advice you ever received?

I worked in a men’s clothing store for a long time in Santa Barbara. The owner would always say, “If you buy nicer clothes – and, yes spend more money – you won’t have to buy as much, and it’ll last longer.” I’ve always subscribed to that. It’s clothing, not a coffee to go. 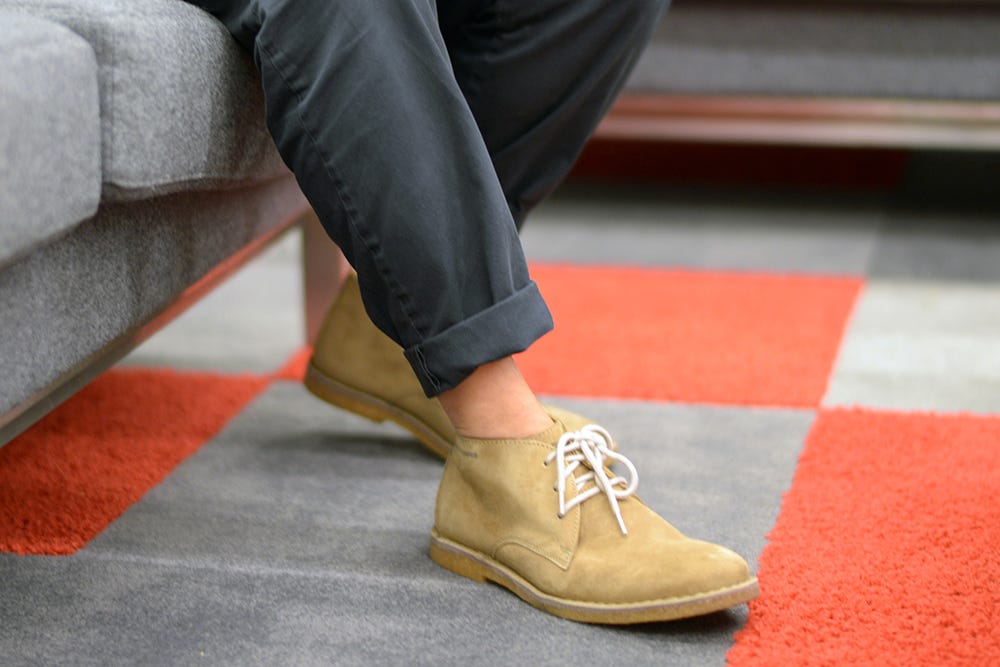 Do you feel any pressure to dress the part of the “cool New York City advertising guy?”

No. I think what’s great about the scene in New York is there’s a million different art directors and we all have a different aesthetic, and it’s about knowing your aesthetic. It’s more about being you, and your vision of you. There’s not that many I know with bad style.

I don’t believe in good or bad style – it’s more about whether you’re intentional about it or not. Especially when you’re in a creative field, style seems like a weird place to pull the brake. For guys who have such a great sense of design, a great eye for what looks good in a magazine, on a billboard…but you don’t care about how you look?

I mean, I’ve never sat there and just put together two random things.

But there’s a lot of people that would.

Yeah, I guess. I think it’s the norm to care, because we’re conditioned to think that, If I’m like this, everyone must be like this.

There’s plenty of guys out there who say or think, “I don’t understand why what I wear is important. I can still do my job. My boss/women/etc shouldn’t care about the watch on my wrist, etc”

You know what’s really funny about that? 90% of men have a certain aesthetic when it comes to women that they’re into; that’s totally normal. It’s so weird to me they don’t understand it works the other way too. There’s gonna be a woman attracted to you for who you are, maybe you’re super funny, you’re this, you’re that. But they’re also going to be attracted to your style.

What’s the vibe you want to put out with your personal style?

You have to be comfortable in yourself. It’s like design. You can’t say, “I hope they like this and like that.” You have to be confident. People pick up on that. If you’re like, “I don’t know if this is going to work…” that comes through. You have to do your thing.

Everything happens out of your comfort zone. Like, I just got a jacket made out of paper. From In God We Trust. It was on sale, and I like things that are kind of crinkly. I asked, “What is this?” And she was like, ‘It’s paper.” It’s light, really cool. It looks like any other jacket. It’s like a windbreaker. If I was less comfortable with my style, I wouldn’t have bought it. 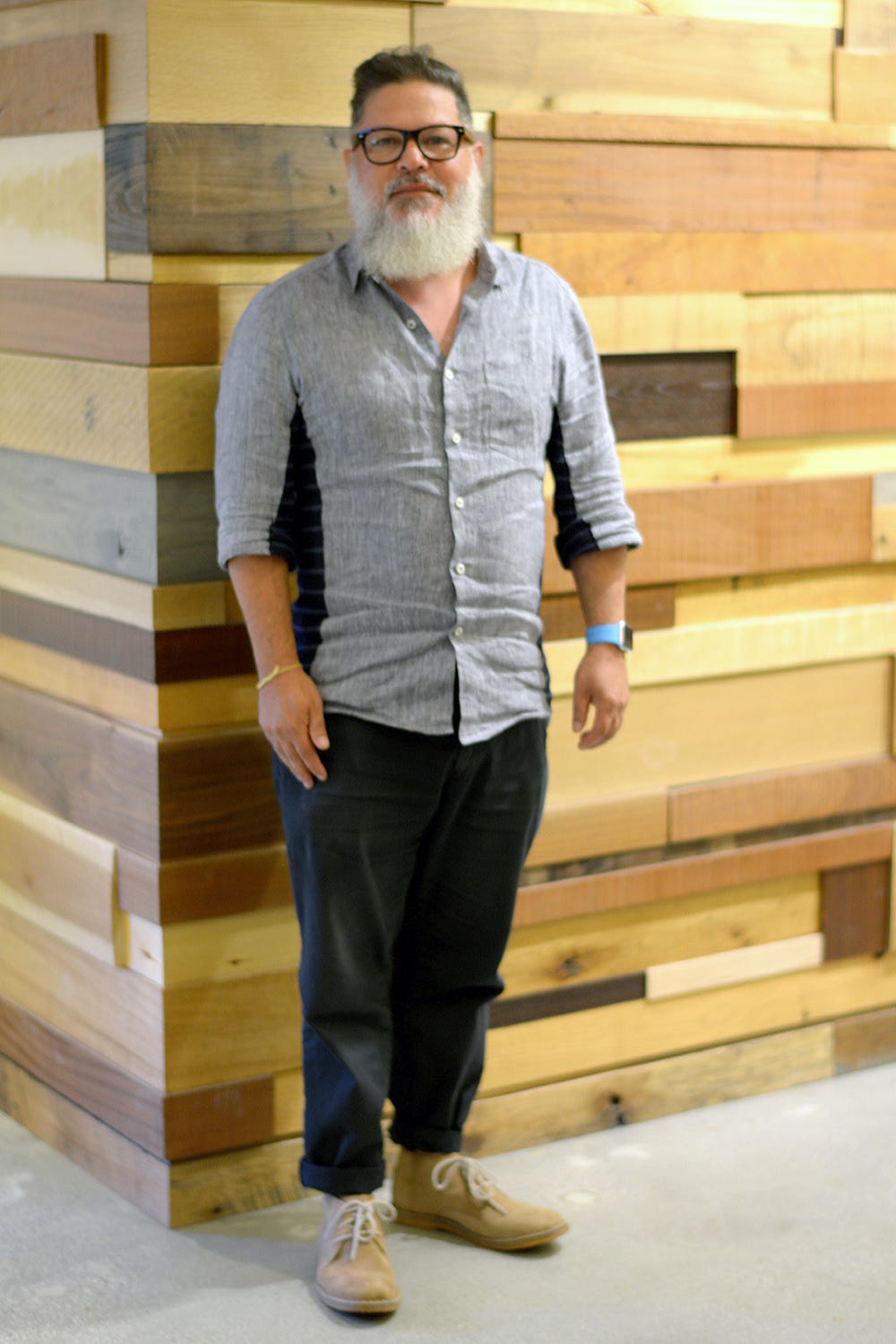 Let’s talk about your beard. What made you grow it out? How do you maintain it?

I was traveling, visiting friends a year and a half, two years ago, in Australia and Bali. I wouldn’t say I started growing a beard – I stopped shaving ‘cuz I was traveling.

I really loved the people I met in Bali; it was a really special place. When I left, they took a picture of me and gave it to me. I looked at it, and I looked…happy. And I had a little beard. And they kept saying, “You look so good with a beard” and I was like, y’know, “Thank you.”

And when I came back, I got ready to shave, and then I thought of them, and I decided to just…let it grow. Weirdly, it kept growing faster and faster and faster. I don’t know what it is. It felt like one day it was just this giant beard. But I remember friends used to make fun of me; “Dude, you have a 2 o’clock shadow.”

I use the shampoo that I use on my hair, just something from the drugstore. And I use beard oil. I buy it at Fellow Barbers, where I get my hair cut. It’s a roll-on style. Just a little bit, after it’s dry.

Were you surprised when it grew in white? Because your hair’s not white.

I’ve had friends that have said, “You should shave it off; it makes you look older.” These two old ladies that live near me, I’m walking my dog and one of ‘em looks at the other one and says, “Look, Santa’s walking his dog.” They thought they were so funny. But I like it. I figure if you’re going to do it, just go for it.

It is a pretty Santa-esque beard. They’re not totally off-base.

Red’s not typically in my wardrobe repertoire, so I think I’m okay.

My go-to staple piece for the fall

A man’s style is important because…

It’s a reflection of who you are. It’s part of your personality and says something about who you are.

What vibe do you try to put out when you get dressed?

We’ll be featuring a new style profile every Tuesday this September, brought to you by Hush Puppies. Outfitting everyday happiness, Hush Puppies makes shoes for people who are confident in their personal style, and appreciate timeless classic design balanced with on-trend style. Thanks for supporting the great brands that make Style Girlfriend possible!