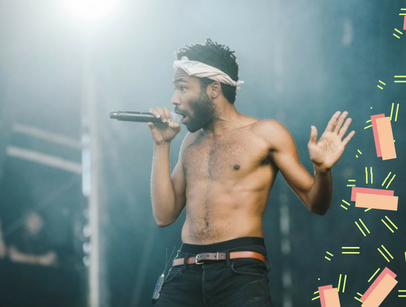 Listen to the latest episode of Undressed. This week, we feel a way about so many things!

>> Apple Podcasts (it’s not iTunes anymore!) ((I’m saying that more for me, not for you…I’m sure you’ve adjusted just fine to this change)

>> A whole bunch more streaming options that you can find here

After catching up on our time out of the city—Taylor to California , me to Wisconsin—we get down to business. Namely that the Song of Summer title (previously settled on this episode) is, gasp, not settled perhaps? Childish Gambino released two songs WITH SUMMER IN THE TITLE, so like, uh oh.

And Ariana Grande dropped another song off her forthcoming album…could she just put that thing out on Instagram already or something? We’re ready!

We both agree that Donald Glover can and should roam freely wearing no shirt, or with a shirt on but unbuttoned all the way. Even to the Oscars.

This conversation segues (somehow) into whether or not the rise of celebrity journalism has occurred in correlation with the decline in general informedness by the population at large. Don’t worry, though. We’ve decided we can fix it. #HardNews

From there, I admit somewhat guiltily that I didn’t really miss New York Fashion Week Men’s (or NYFWM) while out of town and wonder about the Style Girlfriend audience’s interest in the fashion industry event.

The one good thing that came from this year’s NYFWM? Jonah Hill showing up (early!) to the second-annual Jonah Hill Day, an event created to celebrate the street style icon. Yes, it’s weird. That’s New York.

At this point, we’ve gone pretty well off the rails, so we rounded third and slid into home with hot takes just as we were passing the thirty-minute mark.

PS (but not really a PS because I’m putting it here where you should definitely notice it), we do my damnedest to cut these things down after the fact because there’s a lot of chit chat that happens that’s probably left offline. I’m sure there’s a way to check this in the podcasting platform analytics, but I’m curious how long you guys who listen expect these things to be? To me, 30 minutes feels like the sweet spot..do you agree? Do you listen if it’s longer, or tap out after 20? Tell me in the comments!

This week I explained why Henry Cavill’s recent comments about dating in the #MeToo world are problematic af. For a quick rundown, check out this thread on Twitter.

Taylor shares her pro-setting up friends on dates stance (and not just the Netflix movie, though she endorses that too).

One more time, for the cheap seats in the back! Subscribe to the Style Girlfriend podcast here