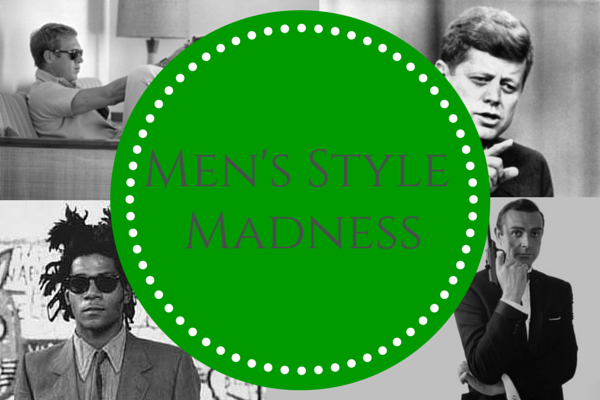 Here at SG HQ, we’re always looking to the brightest stars of men’s style for sartorial and swagger inspiration. But who’s the “so fresh and so clean”-est of them all? That’s what we’re going to decide.

We want to discover which sharp dressers catch your eye these days and whose style most influences your closet. We want to know who you guys would crown the 2015 Man of Style. And so, welcome to the 2015 Men’s Style Madness tournament, where you decide who moves forward in style, and who must return home to purge their closets in defeat.

Before we begin, some ground rules

Much like the NCAA tournament that inspired it, to be considered for this year’s Men’s Style Madness, participants must be both living and culturally relevant. Meaning, no dice for the Grambling State guys of pop culture: If you didn’t have a new album out this year, spent six months in rehab for “exhaustion,” or skipped every red carpet but one, sorry, we’re not interested. (And no cheaters, get outta here, Syracuse)

We can bracket that!

Seeding was determined by a challenger’s overall perceived importance, by which, of course, we mean Twitter followers. For those freak shows without a Twitter account, we eyeballed it. Deal.

While we briefly considered figuring out the birth places of all 64 entrants, that seemed like a lot of work, so instead, you’ll find musicians, politicians, comedians, athletes and a few more grouped by randomization into regions bearing the name of those icons who came before them: Kennedy, McQueen, Basquiat, Bond.

Now, some thoughts on how to judge wisely

Consider the season as a whole

Judge a contender not only by the outfits that we post in the face-offs, but by ALL of his outfits from the past year.

We picked the looks that we think best represent a given contender’s style, but that doesn’t mean that you have to force yourself to forget that one single amazing look that you saw he wore on Saturday Night Live that we somehow left out.

Vote for each contender based on their personal style.

Sound off in the comments!

The winner is totally chosen by you guys, so if you are really rooting for someone, tell everybody why – you may sway a few swing voters!

With that out of the way, may we present to you the Style Girlfriend Men’s Style Madness:

(And here’s the Men’s Style Madness Bracket if you want to fill it out for yourself!)

Get your votes in by 9PM EDT the day the match-off is posted – or your vote doesn’t count!