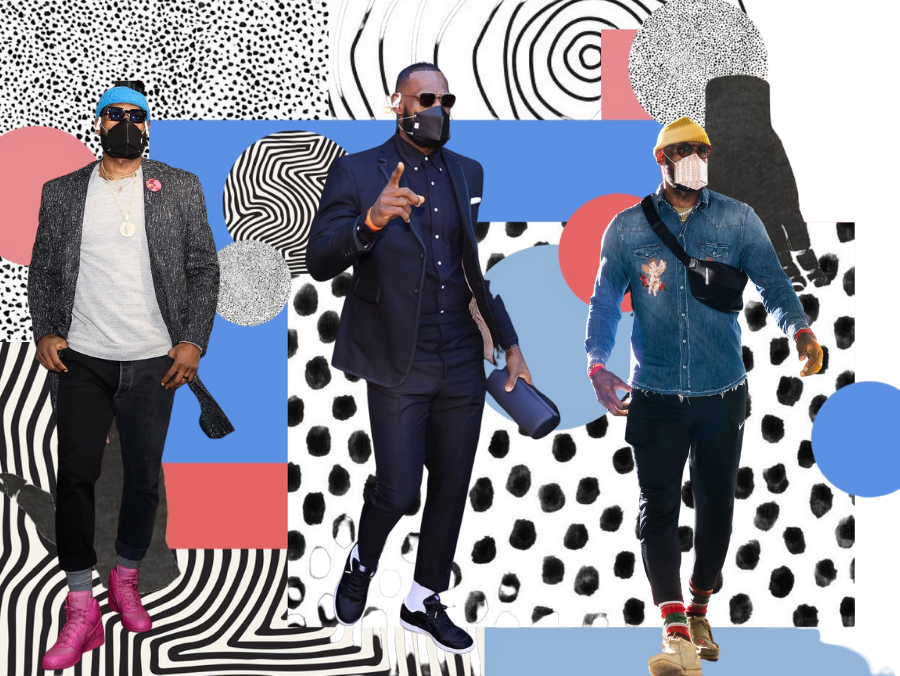 LeBron James has made walking into work its own part-time job.

The arena tunnel entrance has become an opportunity for athletes to moonlight as runway models. But instead of showing off a designer’s new collection, players are putting their own personal style on display.

James is no exception. And while the LA Laker does lean towards designer clothes for his tunnel walks, he’s made choices with his fashion that feel totally unique to the Akron, Ohio native.

Not to mention he’s also modeling good behavior by always wearing a face mask! (Sorry, had to…)

Of course, every celebrity in the spotlight has experienced a fashion evolution we’ve all gotten to watch in real time.

And a lot has changed for James since 2004 when he showed up at the NBA draft in a white suit so large it could be rented out as a wedding tent.

But really, who amongst us doesn’t regret what we were wearing for most of the early 2000’s?

Below, check out 5 lessons in personal style from LeBron James’ fashion choices:

In the time of ‘Rona, superstar athletes would be forgiven for showing up to work in sweats every day.

While James does lean into athleisure, he keeps his outfits a thoughtful balance of casual and formal pieces.

Jeans and a sweatshirt are topped by a really great topcoat. Trousers totally appropriate for the office get paired with a hoodie and high tops.

The takeaway: It’s time to find a new happy medium between dressed up and comfortable.

Especially when it comes to re-entering the workplace (soon…ish?). Look to LeBron for inspiration in riding this delicate fashion line.

2) Fit is important at every size

Sure, hiring a tailor is easy when you’ve recently signed a two-year, $85 million contract extension.

Sadly, however, being able to afford to tailor your clothes doesn’t mean folks always do.

James has clearly gotten the tailoring memo, though. Despite his 6’9″ frame, he’s found a way to make his clothes fit just so. Pants don’t pool at his ankles or swim awkwardly short around his shins. Shirts don’t billow out at the torso or tug at the chest.

Nothing’s too tight, too long, to short, or too loose. Like a basketball-playing Goldilocks, James’ clothes fit just right.

The takeaway: Our philosophy at SG HQ is: a good tailor can be your wardrobe’s best friend!

You’re better off buying a less expensive item (whether that’s a suit, or a pair of jeans) and have it tailored to fit you just so than you are buying a more expensive item that you never take to the tailor for tweaks.

3) When you can do something about an area you feel insecure about, do it!

Now, I’m not going to speculate about what exactly LeBron James has done to get his hairline to move from here to here, because I am currently between legal representation and I don’t know the rules around alleging cosmetic procedures without proof.

What I will say, is if you have a similarly receding hairline and have the means to undergo a hair surgical restorative technique and you want to do it, well, do it!!

That could mean follicular unit extraction (FUE) or a linear strip hair transplant. Or simply starting on a regimen with a prescription solution like Minoxidil.

There is no shame in the ‘improving my appearance to boost my confidence’ game.

After all, you’re here on Style Girlfriend, right? So you’ve already made the connection that when you look good, you feel good.

Of course, you could also shave your head as you start to bald. Go the Michael Jordan route.

RELATED: Tips for Shaving Your Head for the First Time

The takeaway: You have permission to make changes to your appearance. Don’t let anyone (or the voices in your head) tell you that’s vain.

When you look your best, you feel your best, and that’s worth spending time, effort, and (yes, even) money on.

4) Take fashion risks every now and then

This was a couple years ago now, but remember when James (and his entire team at the time) showed up in uber-tailored suits to the playoffs?

The whole crew got kitted out in Thom Browne, a designer known for his shrunken school uniform esthetic.

Did everyone like it? No. Personally, I loved it, and I’m sure it probably helps to know the designer and not just think, “Is he going for the guitar player in AC/DC vibes, or…?”

But regardless, Lebron James’ fashion sense kicked into high gear that year, and he did not come to play.

…Well, he came to play basketball, but you know what I mean.

The takeaway: Don’t be afraid to swing for the fences with your fashion choices. Unlike LeBron, there probably won’t be think pieces about your outfit in Vogue the next day.

Meaning? No harm, no foul if your outfit doesn’t totally land.

I also feel like the sub-lesson here is that more grown men should feel comfortable wearing tight, short shorts. But maybe that’s a takeaway for another day.

5) Wear your heart on your sleeve…literally

I’m not usually one for graphic tees (though I will admit a weakness for the faux-vintage ’90s band tees at Urban Outfitters that are so trendy these days), but clothes that sport progressive, democracy-supporting messages?

Like James sporting gear from his voting rights organization, More Than a Vote.

Like when he wore a shirt that said, “I can’t breathe” after Eric Garner’s death. Or “Black Lives Matter” after Breonna Taylor’s. James called attention to racial injustice and systemic police brutality against the Black community.

James has endorsements on the line that could get pulled for getting “too political.” He also realizes he has a platform and is a leader to more than just his teammates. One way he leads is through his fashion.

The takeaway: Stand up for what’s right, even in your style.

Head to Twitter and let me know your favorite LeBron James fashion moment.