Real Couples, Real Proposals: What You Can Learn - Style Girlfriend
Skip to content

Real Couples, Real Proposals: What You Can Learn

Real Couples, Real Proposals: What You Can Learn
It’s totally okay to steal a few moves from these couples who did it right 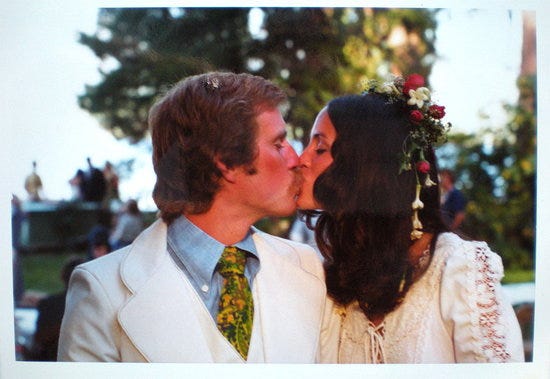 A weeklong series dedicated to everything guys need to know about getting engaged, from the perfect ring to learning from others’ proposal stories.

One April day in 1974, a couple in their early twenties were on a bike ride in Seattle’s Seward Park. They’d been dating a few years but had known each other long before that—since they were teenagers and her family moved in down the street from his. Pedaling along the edge of Lake Washington, he trailed slightly behind her.

Then out of nowhere he shouted, “Hey Fletch, don’t you think it’s about time we got married?” She said she’d think about it, then agreed some days later. In August of that same year they were married on the front lawn of her family’s home in McCall, Idaho.

Almost 43 years later that couple is still married—and spoiler alert, it’s my parents! I love this story, and I love that my mom tells it so casually, the same way she’d relate any other memory of her younger days.

Their proposal story is so indicative of what my parents are like; my dad is really laid back and my mom doesn’t like to make a fuss over herself. They were out together doing something they actually still enjoy doing together—bike riding—and apparently my dad felt just inspired right then and there.

Talk about an engagement story that fits the couple. Even as the occasionally cynical single gal that I am, I love good proposal stories because each one is so telling, and often involves men shedding tears (guys who cry a little at these stories are the real heroes, IMO).

As part of SG’s partnership with the experts over at James Allen, the fastest growing online retailer for diamonds and engagement rings, I asked some of my favorite couples – both married and newly affianced – to tell me their proposal stories. Once I dried my very real “Oh my god you guys are so in love!” tears, I scribbled down a few hot tips to keep in mind when you’re planning a proposal of your own.

“I proposed to Rachel on January 9th—her birthday. I knew I wanted to do something special, but I also knew that she was not one for over-the-top gestures and she’s very hard to surprise! I wanted to do something surprising and celebratory but also warm and comfortable. I settled on proposing at home and then throwing a little party for our close friends and families at a favorite bar of ours in our neighborhood. My plan had the additional benefit of a built-in cover story…  Of course our friends would want to meet Rachel for drinks on her birthday, so why would it be weird that we would go to this bar?

The proposal itself was low-key. We had ordered Thai food, and I proposed to Rachel sitting on the couch. She was a little perplexed at first, but this was by design. I wanted to get her a little off guard so the party would be an even bigger surprise. We made our way to the bar, and I think on the way Rachel could tell something was up, but she kept her poker face up…  At least until we got there. We were both really overwhelmed to see our families (hers flew in from California, mine from Texas) and all of our friends gathered together. It was a really emotional moment for both of us to be able to share something special with so many people we care about—we reminisce about it often!”

The Hot Tip: Privacy and a party can go hand-in-hand.

Ranjan’s proposal to Rachel had the one-two punch of being both super intimate and low-key, and also incredibly well-thought-out and celebratory. They got to have an intimate moment when he officially put a ring on it, then share their excitement with both their families, neither of which live nearby.

Going “full surprise” like that took a lot of thought and planning on Ranjan’s part, and the amount of family and friends that showed up from far and wide to make that moment happen was a real testament to them as a couple. He knew it would mean a lot to Rachel and to their combined families to share that occasion, and pulled it off without a hitch. (At least that’s how it looked—I was there!)

Perfect ring for the Classic Bride: A platinum solitaire setting with an ‘excellent’ grade round-cut diamond is about as luxurious and classic as it gets—a simple design that puts the diamond at center stage. A round solitaire is also a great choice if you want to surprise your bride, as it’s a crowd-pleaser most women will love.

“Pete and I booked an impromptu trip last Labor Day to the Pacific Northwest. We spent our first full day of the trip having just a really nice fun day, driving along the Oregon Coast, day drinking at the winery. That night we decided to enjoy our hotel room patio and its great view overlooking the ocean by bringing a fresh seafood dinner in with a bottle of wine. Since we were ‘in’ for the night I was in my cozy leggings and a sweatshirt, and as the sun was about to set Pete suggested we walk down to the beach. We were strolling along;  it was the most beautiful sunset. There were whales out in the distance, and we spotted a pack of seals nearby as we were walking along the beach, and suddenly—completely and totally out of the blue—Pete turns towards me and is down on one knee asking me to marry him. I was 100% caught off guard, in the best way EVER.

We hadn’t talked about marriage or getting engaged super recently, and we had booked the trip so last-minute it never crossed my mind that this would happen! On top of it all, I couldn’t believe that he’d gotten the ring all sized and ready in time for our shortly planned trip. Clearly if I’d had any thought at all that I was going to get proposed to I would have dressed up a little more than leggings, a Patagonia fleece, and flip flops, but I love surprises and truly couldn’t have asked for a more perfect proposal in the most beautiful setting!”

The Hot Tip: Sometimes, it’s about letting the moment find you.

I love this story because while Pete did have the ring ready for the trip, the rest of it—that cozy dinner in, the casual sunset walk on the beach, the whales and seals jumping—all that just happened. Could he have proposed over a candlelight dinner at a restaurant where he’d made reservations when he knew they’d be dressed up? Sure. Could he have scouted the perfect lookout cliff on along their road trip to pull over and profess his love? Absolutely. But the stars aligned at that particular moment and he seized it!

Perfect Ring for the Modern Bride:  From iPhones to engagement rings, rose gold continues to be all the rage. This petite pavé ring will look beautiful and fit right in with plenty of jewelry already on her nightstand.

Want something even more “her?” You can create a personalized engagement ring that feels truly special with James Allen by designing a ring your way. Start with the stone, the setting style or the metal, then go from there. Personally, I found it to be the most fun to start with the stone (like this emerald cut sapphire) then setting it (this one looked pretty as a solitaire in 18K gold).

“We drove up to the Storm King Art Center, the open-art sculptural park a couple hours away from Manhattan. We had been wanting to go for years, but we didn’t have a way to get there since neither of us has a car. So, we reserved a Zipcar and spent the whole day up there, taking silly photos and Instagram Boomerangs at the sculptures. It was 10 minutes until closing when he asked if we could go back to one particular sculpture because he wanted one more Boomerang, which I thought was strange, but whatever. I took the Boomerang of him popping his head out from the sculpture’s pillar, and when I went around the pillar to show him the Boom, he was on one knee. It was such a clever ploy—I didn’t suspect it at all. I was so surprised I don’t even know what he said (but I said yes, anyway). I’m also not into grand public gestures, so I was happy that this moment was shared just between the two of us.”

The Hot Tip: Start your next adventure with a new adventure.

Going on a trip somewhere you’ve never been—together—is so romantic. Ray planned an adventure that ticked something off the couple’s bucket list and made for an epic proposal setting. When it comes to planning your own destination proposal, remember that “new” is whatever you want to be.

Returning to a special location is also a thoughtful and sentimental choice. Suddenly that place will go from, “a spot we love to visit every summer,” to “the spot where we got engaged.” A new and enduring memory will be forged there, cementing its importance forever!

Perfect Ring for the Stylish Bride: It might sound contradictory, but many brides-to-be with more forward-thinking fashion sense sensibility love the look of a vintage-inspired ring, like this Octagon ‘Halo’ setting, which feels reminiscent of Art Deco designs of the 1930s. With this ring, you might also consider a gem like sapphire or emerald as your center stone instead of a diamond!

Parties, trips, private moments… There are a million uniquely meaningful ways you could propose to your forever boo. Hopefully these first-hand proposal stories will give you some inspiration and remind you that no matter where you get down on one knee or what you say, the ideal outcome is that she totally freaks out, kisses you and agrees with all her freakin’ heart. Oh, and that she’ll spend the next 24 hours straight (at least) staring at the sparkling new addition to her left hand.

WHAT’S THE BEST PROPOSAL STORY YOU’VE EVER HEARD (YOURS OR OTHERWISE!)?

Brought to you in collaboration with James Allen. Thanks for supporting the brands that make Style Girlfriend possible!