Morning Suit in the Streets, Tuxedo in the Sheets

Morning Suit in the Streets, Tuxedo in the Sheets
(Royal) Wedding Facial Hair and More 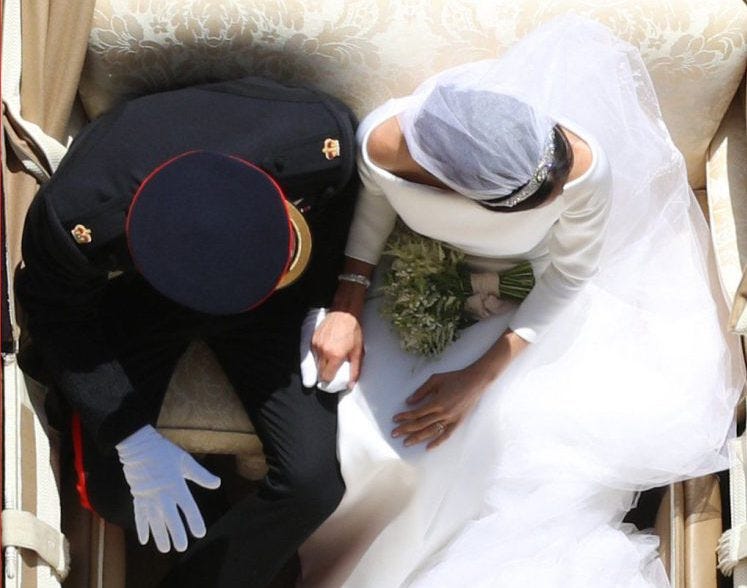 We wasted exactly zero seconds this week getting into the only good news from week—the royal wedding.

Our favorite British bad boy, our beloved Prince Harry, married a divorced, biracial American actress, and we. were. here. for it. Her name is Meghan Markle, and you’ve probably seen her on Suits. (Boys love Suits. This is a fact.)

Listen to the podcast below, or on iTunes and Stitcher:

Harry donned a mostly-black military uniform, and looked amazing. (Read all about his and Prince George’s Savile Row tailor here.) After much speculation, he didn’t shave his beard, and both Megan and I respect his “still you, but the best version” grooming.

We also spent a not-insignificant amount of time talking about what a morning suit is, and who, out of the royal wedding guests, did and did not wear one. David Beckham did (and as you can see above, looked absolutely perfect), as did Prince Charles, because, duh of course he did. George Clooney did not, which, y’know, fine. No one’s looking at him anyway.

The kicker came for Megan and I when the bride and groom debuted their outfit changes for the evening reception.

Meghan looked lovely in Stella McCartney. But Harry, oh Harry, looked the absolute best he has ever looked—in a velvet tuxedo jacket, traditional tux pants and a simple black bow tie. I honestly think I dropped an egg when he helped Meghan into that vintage Jag and they drove off into the distance.

Anyway… We loved the royal wedding and we’re not afraid to say so! We’d like it on record that it’s worth recognizing that you can feel conflicted about certain archaic institutions—both marriage and the monarchy—and still be really excited for two people who are about to embark on a joyful, sometimes scary, totally unknown path together. Kay? Kay.

Moving right along, we also talked briefly about GQ’s new comedy issue cover, which takes a playful stab at Vanity Fair’s botched cover from January that featured one too many limbs. (See the GQ cover here and the Vanity Fair cover here.) It’s fun and funny, but also, layoffs? We don’t know as much about the current state of publishing as maybe we should, but still.

This week’s reader question was a rather vague one, but timely. What’s the best way to pack for Memorial Day Weekend? Megan takes the “macro” approach and I take the “micro” approach and frankly, we nail it.

I felt the need to vent about how our friend (and friend of the pod) Polly Rodriguez, has done some great press surrounding her company’s ad artwork being rejected by the MTA here in New York City. (Those are the people that run the subway, just FYI.)

Her company, Unbound, is all about female sexual health and pleasure, and the very cool, artistic ads were rejected because of what Polly believes (and I agree) is an extreme double standard. Erectile Disfunction pill company Romans is currently advertising on multiple subway lines so… What gives?!

Megan takes us home with a sweet hot take—no shade corner this week!—about her adoration of Paul McCartney giving a shout out to his daughter Stella for designing Meghan Markle’s second wedding dress. We love him. He’s perfect. That’s all, basically.

Wow! How proud am I of my daughter Stella designing this beautiful dress for Meghan on this historic day! Congratulations all round. Me, Nancy and all our family send our love to all those involved. #royalwedding #stellamccartney

DID YOU WATCH THE ROYAL WEDDING?!

>> Don’t forget to subscribe to Undressed on iTunes and Stitcher!