Listen: New Podcast “Our Old Dads”
On Father's Day gifts and Being a "Nance in New York" 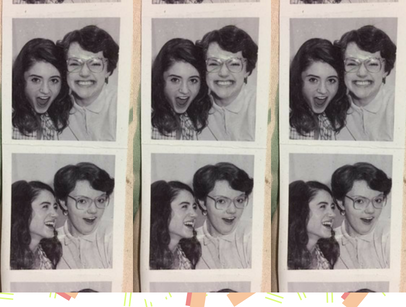 The great thing about being sort of “new” to podcasting, is that you never really know how these things are going to get started. This week—Megan came in hot with a little opening chit chat about…bedbugs. Yes! She’s terrified of “bedbug season” and she wants the world to know.

Listen to the podcast below, or on iTunes, Pocket Casts, Overcast, Stitcher, or wherever* you get your podcasts:

*No, still not Spotify. Megan swears she’s working on it, but tbh I’m starting to get skeptical…

But guys, I understand! The fear is real. It’s a nightmare situation that you can’t really control, and it’s one of those New York Things—everyone knows someone who’s had bedbugs. But you know what? Bedbugs don’t make you a bad person. They might cause you to, as Megan puts it, “throw all your clothes in the street and light them on fire,” but if it happens to you, don’t worry. We won’t shame you. We won’t hang out with you either, but, you know how it is…

As per usual, we once again try to talk about #songofsummer. However, we’re starting to freak out a little bit. We just don’t seem to have a Song of Summer yet (check out our contenders here)! We’re setting a deadline of the weekend before the 4th of July, and if nothing new comes out, we’ll… Crown one ourselves! I’m rooting for “New Light” but Megan doesn’t think it can be. Honestly though, as long as it’s not “Babe” I’ll be good.

Next, we jump into Father’s Day because—spoiler alert—it’s this weekend! Don’t freak out though, because Megan’s got the only gift ideas you need. I won’t spoil them all for you here (we gotta seduce you into listening somehow!), but I will say that Mark Consuelos heavily endorses one of them, and I want one now, too.

From there we pop right along to an interesting issue… One that, quite frankly, is your fault! Ha, I’m kidding! But not really. Megan sent out a newsletter to all of you wonderful dudes, with the subject line, “Hey boyfriend.” Cute and innocuous, right? (She’s Style Girlfriend after all.) Well, perhaps not! She almost-rhetorically asked if you guys minded if she addressed you as such, and, what do you know, a vocal minority of you did indeed mind.

Apparently some of you are worried that your significant other might see this subject line and assume that you are having an illicit affair with a woman who addresses you as “boyfriend” in the subject line of an email. I think that’s insane. Megan thinks that’s insane. We discuss.

This week I decided not to have an opinion about anything, but rather to share a funny story about how lately, I’ve been pretty much exclusively dating people who don’t live in New York—but I’ve been doing it somewhat prolifically. It’s got me feeling some type of way and long story short, I had a celebrity encounter on the street the night before recording that perfectly capped off the whole thing. The whole Stranger Thing(s)…

Me in New York: The Barb.

Me in Sun Valley: The Nanc.

We end thing’s with Megan’s hot take, which is, to be honest, a sad but necessary topic to address this week. With the suicides of both Kate Spade and Anthony Bourdain, we’ve been thinking a lot about mental health, and how we can be more supportive and observant with our loved ones.

It’s important to talk honestly and openly with friends and family, and to listen to what they tell us. If you or a friend might need some resources or a way to check in with someone you’re worried about, The Cut has a great jumping-off point here.

DO BED BUGS EXIST OUTSIDE NEW YORK? (REALLY, WE WANT TO KNOW!)