How to Host a Successful Theme Party 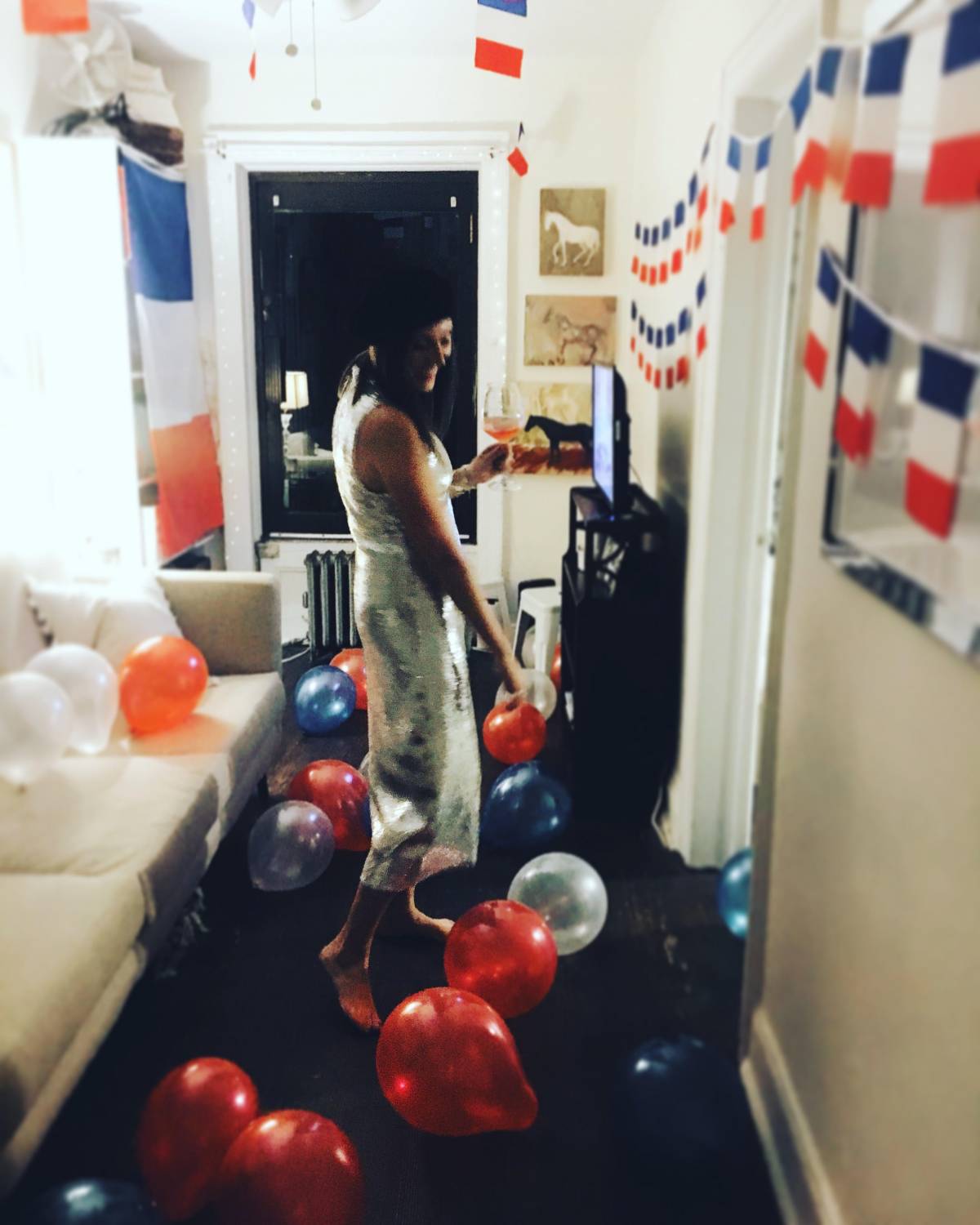 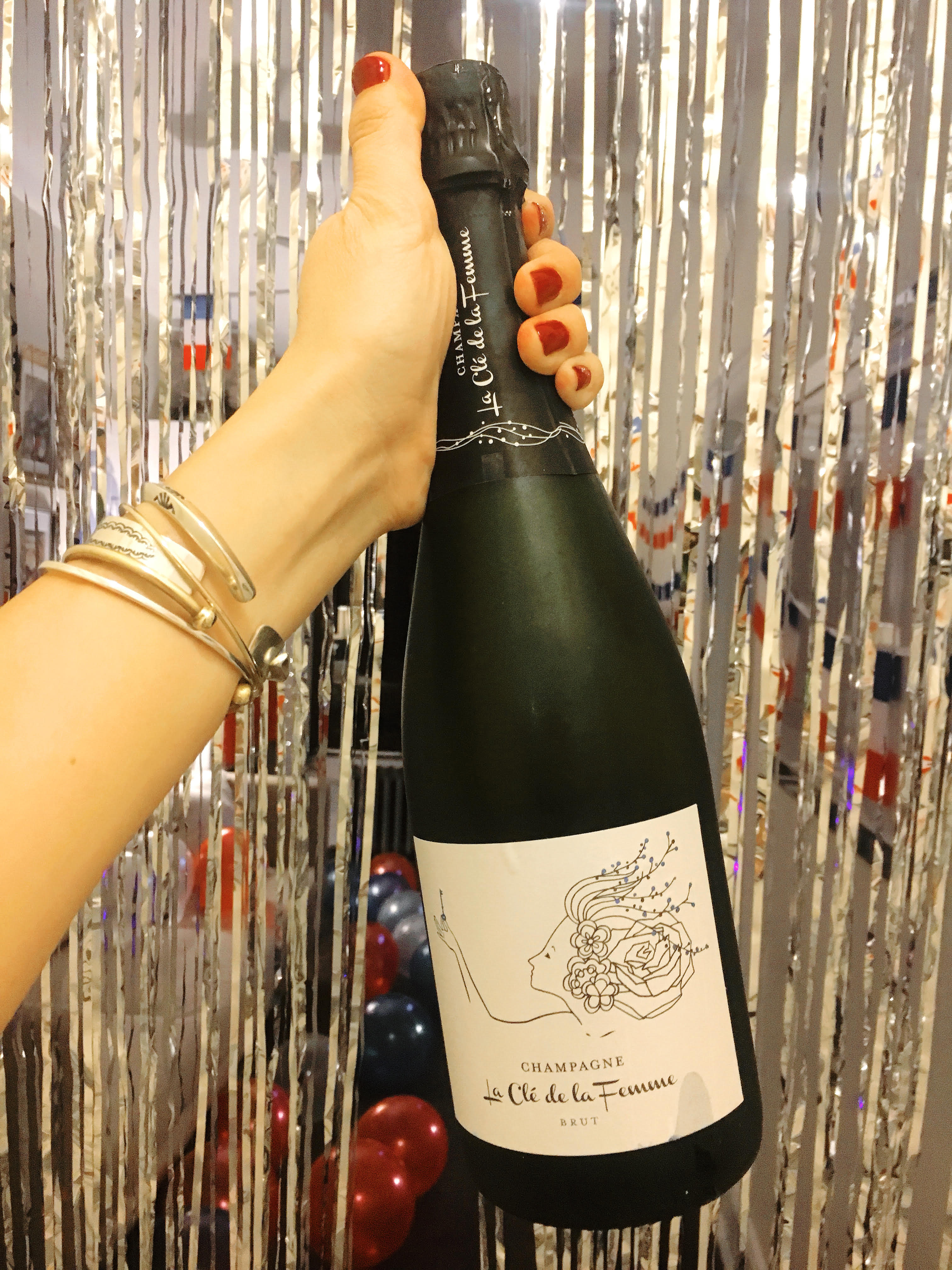 Read up on unique party theme ideas and how to be the perfect host, below…

A piece of personal history about me is that I spent a fair amount of time in France during my formative years. The result? A bit of the country’s joie de vivre definitely got into my bloodstream. Croissants and charcuterie plates are my favorite food groups and I wear berets on the regular. Just like, out in the world.

So, when I started thinking about how I wanted to celebrate my 33rd birthday in October—throwing yet another Halloween-themed party felt like “too much” for such a nothing year—my roommate suggested picking a theme.

“You know, something that’s just very you. Like France.”

And voila, as they say!

I loved the idea of having a party at home, and giving it a theme that people could easily participate in and get excited about embracing. It all came together surprisingly easily. Which got me thinking about how theme parties are just so fun and enjoyable and worth the effort and we should be having more of them, all year long!

Not convinced just how easy it is to throw a cool, classy and successful theme party? Well pull up a chaise, make yourself a cafe au lait and read on. I’m going to help you throw the ultimate fête to remember.

1. Pick a unique party theme idea you love that is also kind of easy. 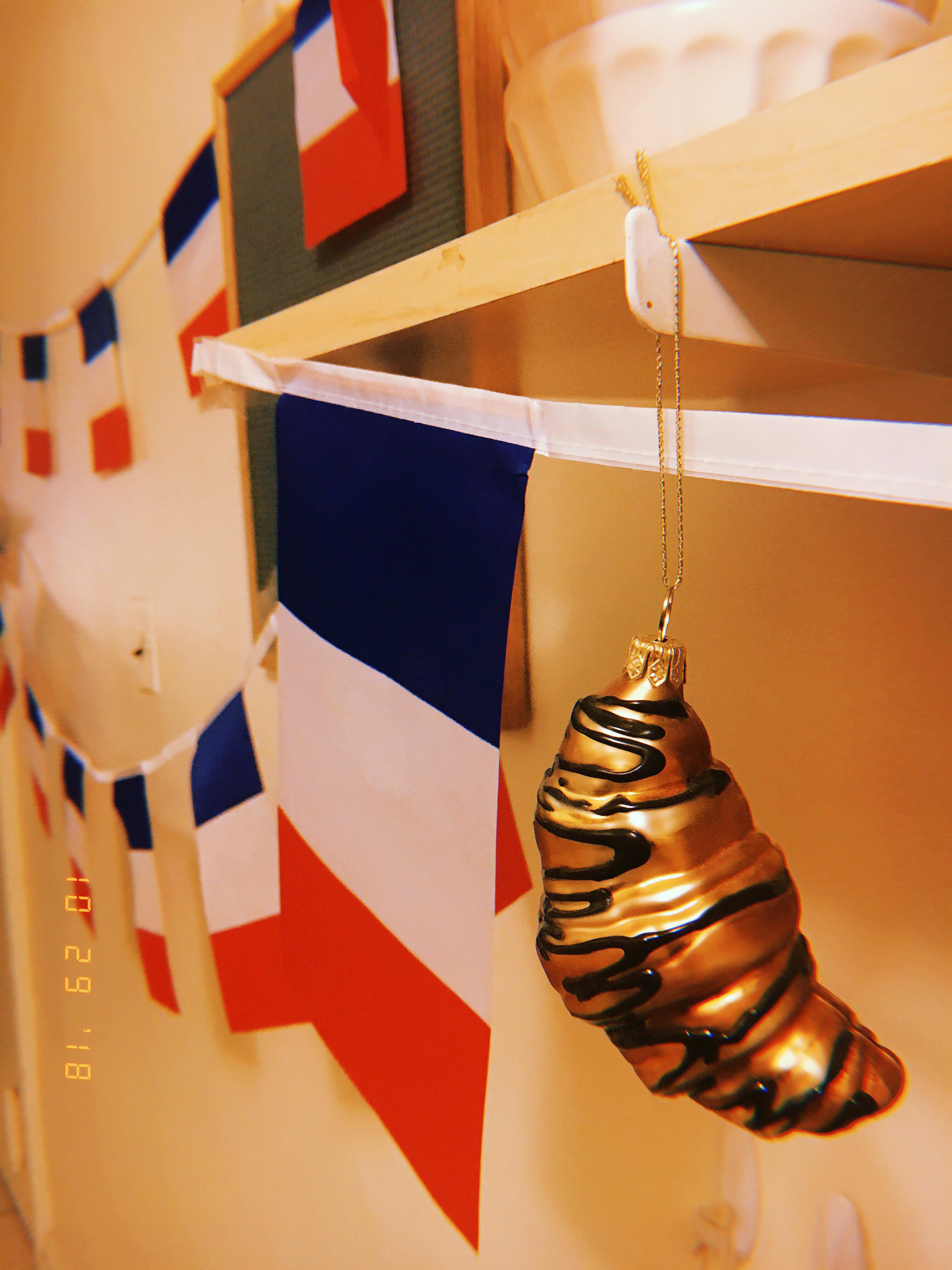 France as a theme was a no-brainer for me because I love the food and drinks, appreciate a red, white and blue color scheme and wanted to see if i could get all of my closest friends to come over and wear berets in my tiny East Village apartment. Or as the French say, chez moi.

There are a lot of theme ideas that fit into this category of fun and easy but not too complicated. You just need to quickly take stock of things you like, places you’ve been, or a theme you’ve always wanted to steal from someone else! (i.e., Diddy isn’t the only one allowed to throw a white party, guys.)

Maybe it’s just “sports” and everyone has to come in a uniform or a jersey and you serve all your favorite pub foods and extremely generic beers. Maybe it’s a dog party, because, well, you really like dogs. You can dress as a dog, people can bring dogs, you can eat hot dogs and make a drink called the Moscow Drool… You get the idea.

Additionally, I’d recommend committing to the theme from the very beginning—right down to the invitations. Use a free design program like Canva or PicMonkey to create an invite that announces the theme, which you can then easily just paste into an email and send to your guests.

2. Don’t skimp on the decorations.

Because I’ve always been a crafty, party-loving person, I was perhaps more excited about the decorations for my France-themed party than anything else. (Except the cheese, maybe. But more on that later.) I went all-out with French flag bunting and red, white and blue balloons. My best friend even sent me a light-up Eiffel Tower to adorn the bar.

Make things easy on yourself and hit up the ultimate one-stop shop for theme party prep: Amazon. You’ll find all kinds of banners, paper decorations, silly party favors, balloons, streamers, flags… You name it. And best of all, you can probably get everything you need shipped via Prime and for less than $50.

Also just a note to say that I know I said “classy theme party” at the beginning of this story, but when it comes to decorations, it’s fun to be a little cheesy and over the top. Decorations help everyone get into the spirit of the party and of course, take more fun photos!

*My biggest regret for my France-themed party was not securing a poster-sized photograph of a Parisian cityscape so that people could take photos in front of it “pretending” to actually be in Paris.

3. Play up the theme with your food and drinks. 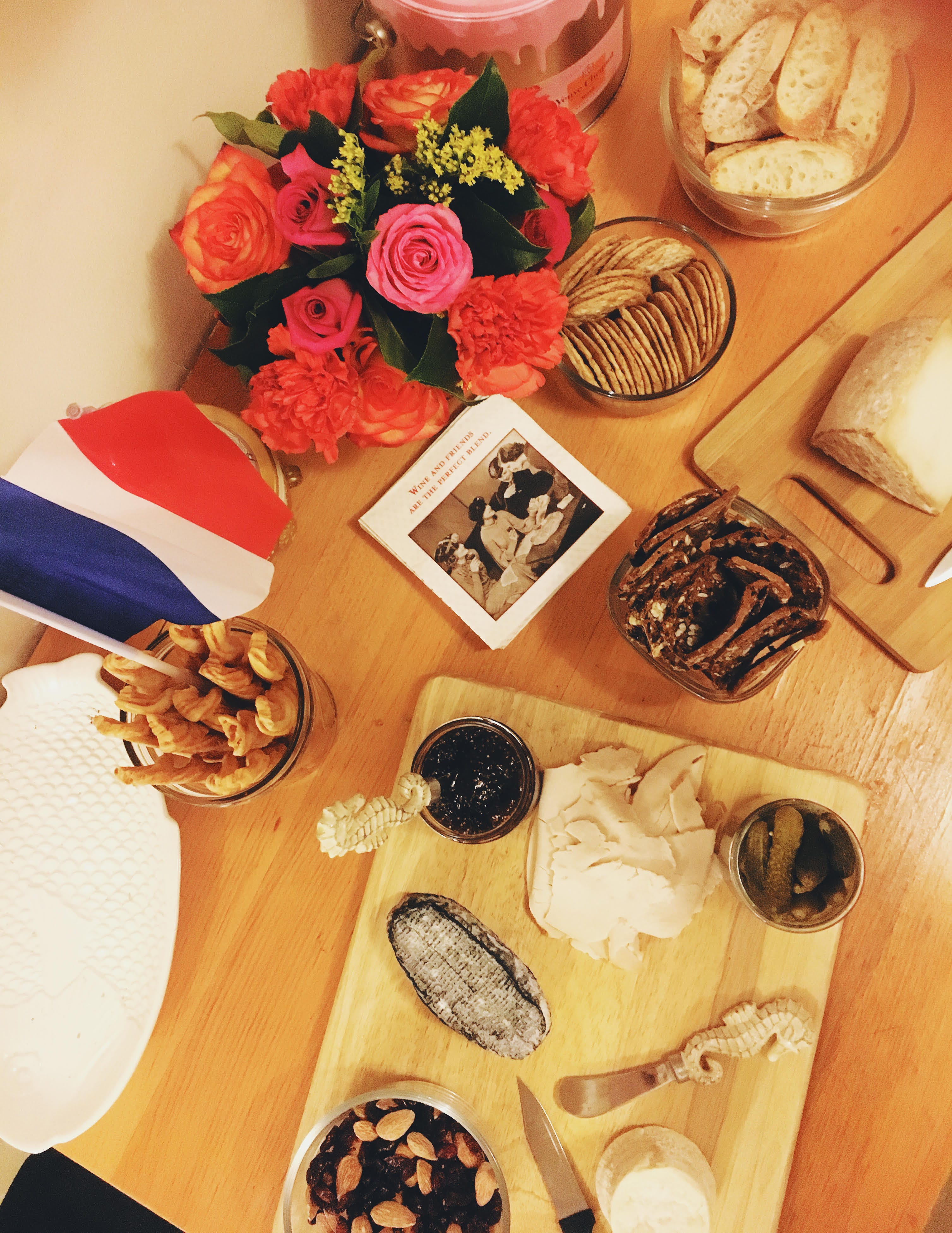 Now here’s where I get really excited. Food and drinks can really make or break a party, especially when there’s a theme. There’s so much opportunity to have fun and really set the tone of the event with your food and drinks. Will your sports party have cookies shaped like footballs? Will there be a specialty cocktail called the Slam Dunk? Who knows!

For my France party, I heartily embraced two of the most delicious things about the country, the culture and the cuisine: cheese, champagne and red wine. We had a special bottle of rosé bubbly from Veuve Clicquot and Beaujolais from my friends at 90+ Cellars.

For the specialty cocktail, what could have been more perfect than a French 75?! This bright and fizzy drink was a huge hit, and that was largely because I used a really good Champagne (from 90+ Cellars) and a really, really good gin called Monkey 47. (You can find the recipe I used here.)

And finally, the cheese.

My new meilleur amis over at Goat Cheeses of France were kind enough to send a variety of decadent, delicious chèvre, including Bethmale, Delice du Poitou and my new favorite dairy product on the whole of the earth: Chabichou du Poitou. They served as centerpieces to a couple of easy and extremely good-looking cheese boards I put together with toasted baguette slices, Raincoast crisps, fig jam, charcuterie, cornichons and a little mix of dried cranberries and almonds.

Unless you’re hosting a true dinner party, little appetizers and finger foods are the best way to keep your guests satiated while also keeping them standing and circulating around the party. Create little snack stations around the room, or have the bar in one area and the food in another, which will keep people from feeling trapped in one corner or one room all night.

4. Make sure your playlist really sets the mood.

I’ve said it before, but it bears repeating that I think a playlist has the ability to make or break a party. It helps set the mood, get people into the “party” mindset and can either build up the energy or mellow it out as the night/day goes on.

For my France-themed party, I wanted to have a mix of French music, obviously, and fun party tunes that would get people dancing and drinking. That melange included French pop artists Christine and the Queens and YELLE, as well as some Robyn, A little Barry White, a dash of Justin Bieber, The Notorious B.I.G. and this absolutely epic track from INOJ that I bet you kind of forgot about but are now so excited to have on your radar again.

5. Encourage everyone to dress to the theme—and make sure you do, too. 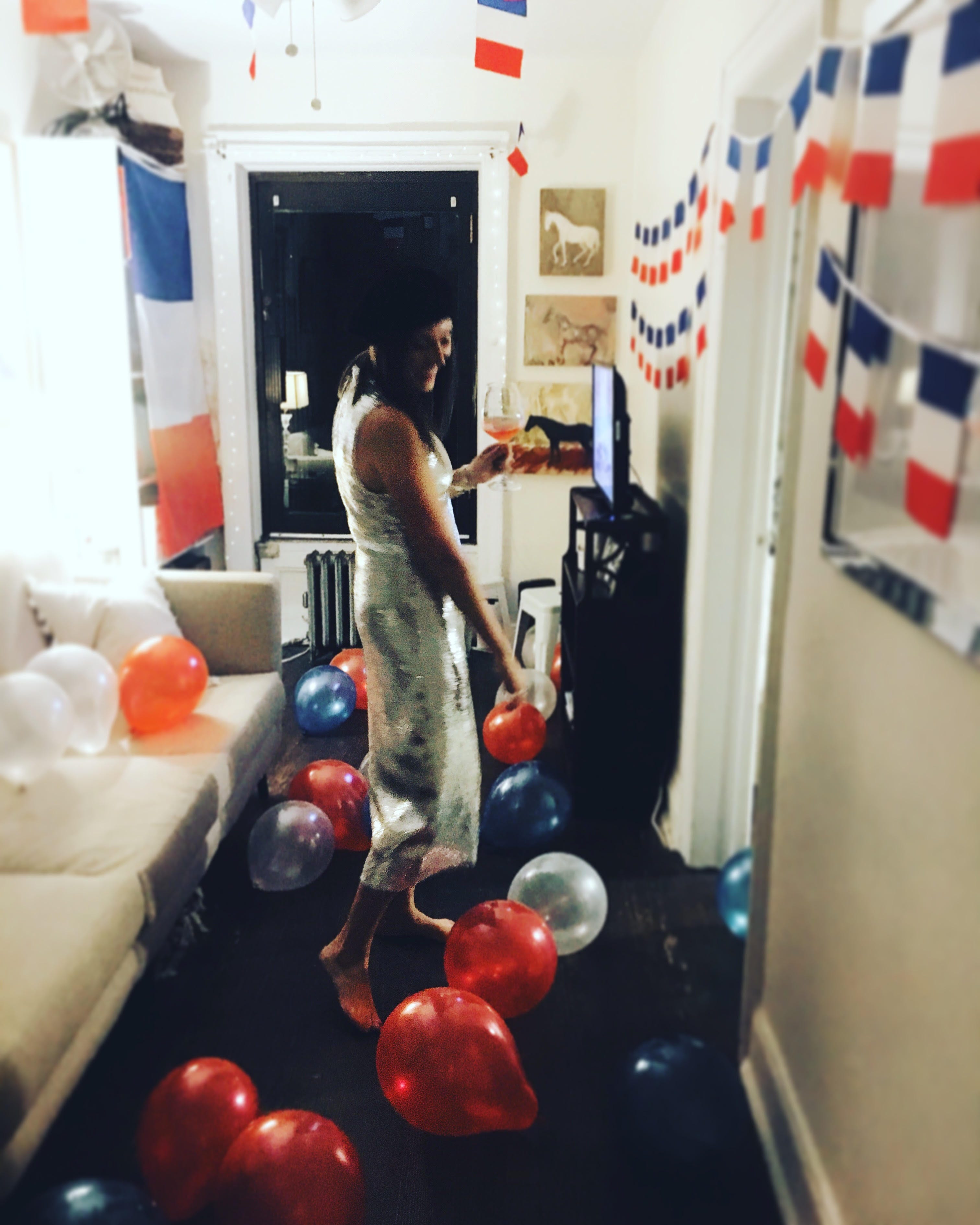 I get that some people are really stressed out by costumes. They don’t like being forced to be creative, or risk looking silly for a second. But I really don’t care—costumes are what make a theme party go from fun and festive to epic and unforgettable.

An easy theme with a broad interpretation is the best way to get even your most stubborn anti-costume friends to at least try. At my France party, there were striped shirts, black turtlenecks and even one amazing girl who came dressed as Napoleon—mustache and all.

Another way to get your friends into the spirit is to do some of the work for them. I found a pack of 10 costume berets on Amazon and had them out and ready for people to wear, which proved to be hilarious and very well-received, even by those who showed up fully costumed-up already.

At the end of the day, a theme party is just a really good excuse to be silly and a little immature for a night. Decorations and costumes make us think about when we were kids, and honestly, what could be better than channeling some of that childlike joy while enjoying adult beverages and classy AF cheese boards with your favorite people?

ARE YOU A NATURAL HOST LIKE ME, OR DO YOU PREFER TO BE AN ATTENDEE?