Taylor's Take: How to Have a Good Conversation on a Date - Style Girlfriend
Skip to content

Taylor’s Take: How to Have a Good Conversation on a Date

Taylor’s Take: How to Have a Good Conversation on a Date
Just like putting together a great outfit, it requires a bit of effort 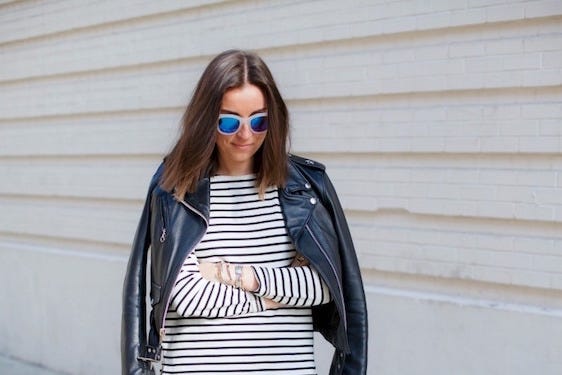 Kicking off this week’s Taylor’s Take by hitting you with some data. Yes, science! Last week I employed the help of a licensed professional, and today I’m dropping facts and figures about the art of conversation—most especially as it relates to dating. You know what I’m talking about. When it’s good, you feel alchemy and chemistry and magic all at once. When it’s bad, you start considering the kind of wacky escape scenarios they use on TV: emergency phone calls, fake illnesses, early meetings the next morning. In the same way you want to wear a great outfit on a date, you want the conversation to be great too, and both require some effort.

If you’re with me so far, then my first fun fact won’t surprise you at all. According to a recent survey by dating site PoF, 87 percent of singles have found someone more attractive after a conversation. And go figure, 90 percent would rather talk all night on a first date than have sex all night. Okay, then! So if the numbers are to be believed, being a great conversationalist is more important than being a total sex god. (Though if you can be both, definitely do that.)

Let’s all keep it in our pants for now, though, and get down to the serious business of how to have completely mind-blowing conversations while totally clothed (at least at first).

Below, a few helpful tips on how to have a really good conversation on a date:

LET’S START WITH THE OBVIOUS: QUESTIONS ARE KEY!

“No one is as interested in you as you are.” Please let that quote from this Science of Us article sink in a bit. A Harvard Business School doctoral student found that, a surprise to (hopefully) no one, people will like you more if you ask them a lot of questions during the course of a conversation. While simple in theory, I know from experience that many of us struggle with this concept—especially on dates. You get nervous or you try to sound impressive and somehow you wind up telling a 15-minute story about what your dad does for a living without even taking a breath. We have all been there.

My best advice for remembering to temper your storytelling and establish a balance in the conversation is to think of it like tennis. A good rally involves a playful back-and-forth, good give-and-take—as in you give, they take and vice versa. You don’t need to keep score, but be aware! In the same way I’m wary of guys who don’t ask me questions, I encourage you to be wary of any woman who acts the same way—it’s often a sign of ego issues, unchecked insecurities, or general ambivalence, all of which get pretty un-sexy, pretty fast.

Asking questions during a date is like putting on your underwear: It’s the foundation on top of which everything else rests, and sets the tone for everything that comes next.

THE FOLLOW-UP QUESTION IS YOUR SECRET WEAPON

That same Science of Us article also noted that the best questions to ask are follow-up questions because they prove that you’re listening. A simple and elegant truth, no? So, put this into practice on your next date when she says something that piques your interest. Resist the urge to jump in with your related story right away. Instead, wait until she’s done and trying something like, “That’s awesome. So why do you like Niagara Falls so much?” Or, “Wait, you studied abroad in France? Which city? Was it fantastique?”

I feel comfortable speaking for the women of the world when I say: We love this. Feeling heard? Feeling understood? Sparking curiosity in a smart, kind, well-dressed guy like you? These are signs of a great date. And they make us want to reciprocate with follow-up questions of our own so that you, too, feel understood and worthy of attention and love.

The follow-up question is like conversational equivalent of the moment you decide to wear a great OCBD instead of a t-shirt on your next date. It’s a deliberate choice that shows you’ve given this occasion some thought, that you’re invested in what’s happening and you’re not a totally self-involved bozo.

Recently, I was on a second date with a really interesting guy. We were sipping Malbec and dipping crusty baguette slices in the buttery leftovers of a warm escargot plate. The candlelight was was perfectly dim—like an R&B slow jam music video from 1996. Things were going great—until I noticed that while he was sharing the garlicky treat, he wasn’t really sharing the conversational control. Apparently, he noticed too, because he came to an abrupt halt in his story about his family and said, “Okay that’s enough about me, I want to know more about you.” I said okay and smiled. He then said – and I swear I’m not kidding – “What’s your favorite flavor of ice cream?”

I don’t have to tell you, but that transition was about as clunky as a pair of square toe shoes. To be fair to him, I was relieved that he picked up on the imbalance and wanted to shift the conversation back to me. And when I told this story to my mom, harping on how strange the ice cream question was, she reminded me that there was a very good chance he was just nervous or trying to be funny and I should really cut a nice guy who takes me out for escargot some slack.

She’s right, of course (thanks, Mom!), but I’m going to offer a hot tip anyway, in hopes of saving you guys from a similarly awkward pivot. The easiest answer here is simply to stay on topic or move to something somewhat related. Talking about family? Ask your date what she was like as a kid. Talking about that cool trip you took that one time? Ask her what place is next on her bucket list. If you really want to redirect the conversation, introduce a new topic by plainly announcing what you want to talk about next. For example, “I know this is sort of off-topic, but I’m curious about that collection of stamps in your Tinder profile picture. Tell me about it!”

***I’m focusing on early dates here because that’s my most accessible frame of reference right now, but I want to open up this dialog to guys who are long-term relationships and marriages, too! While good conversation skills are essential for getting a relationship off the ground, they’re arguably even more important for keeping it strong and healthy and happy as the months and years go by. (Right?) Like deciding to don a suit for date night even when you don’t have to—putting in that extra conversational effort makes an everyday occasion feel special. I’d love for some of you guys with significant others to share in the comments what kind of a role conversation plays in your relationships once you’re really “in it.”

WHAT ARE SOME OF YOUR FAVORITE DATE NIGHT QUESTIONS?