Workout 101: Guys’ Guide to Pilates
it's way more than stretching 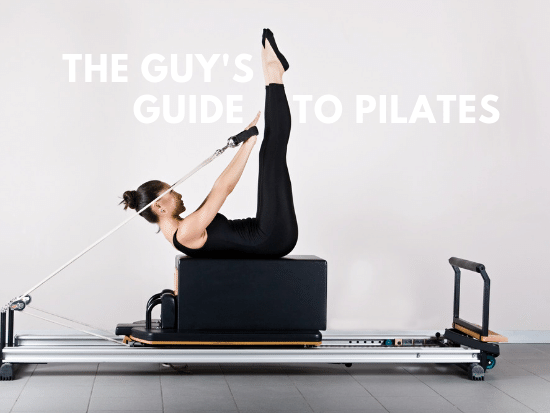 When it comes to confidence, there’s plenty of places a guy can start. For some, it’s a wardrobe overhaul. For others, it’s tackling a new fitness routine. At SG HQ, we’ve found some guys are reluctant (but curious!) about certain workout classes. If that’s you, check out our Workout 101 series. Next up? A guide to Pilates for guys…

I say Pilates and what do you think? Kind of like yoga but weirder? Sixty minutes of stretching? Those bizarre contraptions that look like a torture-porn prop from Hostel?

Gentleman, Pilates is so, so, so much more.

Yes, Pilates shares some important similarities with yoga, though in some classes you’ll unique equipment we’ll talk about later.

Pilates is an incredible strength trainer, body aligner, and rehab supporter. In fact, Pilates for guys might be the ultimate “fit for life” workout—which is probably the reason even a muscle-guy like celebrity trainer Tony Horton included it in his P90X series.

If you’re tired of endless leg curls and shoulder presses—which can land you painful repetition injuries—it might be time to take a chance on Pilates.

Check out this guide on Pilates for guys who want to try it:

What is Pilates, anyway?

Pilates isn’t just appropriate for guys—it was invented by one, the titular Joseph Pilates.

“I think that because Pilates is extremely popular with women and dancers, men think that it’s a women’s sport—and they don’t realize that Pilates was in fact created by a man, and a beer-drinking, cigar-smoking boxer at that!” says Pilates instructor Annie Venier of Le Petit Studio NYC.

Pilates’s big philosophy was that mental health is bound up in physical health.

According to Pilates, “Physical fitness is the first requisite of happiness,” and we’d be hard-pressed to disagree.

Some classes, like national chain studios Solidcore and Club Pilates, are taught on machines (called the Tower and Reformer…they sound badass, right?) while other classes are primarily taught on mats.

Some teachers use additional props—balls, weights, and so on. Just go with it. You’ll focus on core strength, alignment, and proper breathing, not just for class, but for life.

It’s a high-intensity, low-impact workout emphasizing slow and controlled movements. Meaning? You’ll work your ass off but won’t hurt yourself.

“Half of my clients are men and interestingly most of them are true athletes and martial artists,” Venier says.

Yeah, like Kobe Bryant and Martellus Bennett, who has said Pilates helps him “work on rebalancing and activating my muscles . . . supporting muscles that hold up the bigger ones.”

Clarke says her male students are there for different reasons.

“Most of our male clients have been referred to us because of their back pain,” she says. “It is safe to say that they probably wouldn’t be here if weren’t in pain.” Instead of rehab, why not get ahead of the game and consider Pilates your pre-hab practice?

What guys should wear to a Pilates class

You’re going to be sticking your legs up in the air, behind you, in a split…so you’ll want lined shorts or to wear compression bike shorts to keep everything contained.

Pilates requires a lot of coordination and control. The movements are incredibly precise—a quarter-inch off and it can feel like you aren’t doing anything at all.

Make a tiny adjustment? It feels like the hardest you’ve ever worked in a gym.

Luckily, most studios offer introductory and novice-level classes. It could even be worth springing for a private class to start, which allows for a safe space for all your questions that may feel basic or embarrassing.

“It’s very easy to take some one-on-one classes prior to group classes,” Venier says. “It’s one of the few group activities you can cheat at by getting a leg up before you jump into a group class, should you choose to.”

I’ve come out drenched from a Solidcore class. Mat classes won’t be as physically demanding. If you’re not sure and have somewhere to be shortly after class, you might want to call ahead and see what the studio says about your expected sweat level.

Regardless of if you sweat or not, if you’re doing it right, you’ll definitely be sore the next day.

How hard is Pilates, really?

It’s as hard as you make it—and that can be really hard. It likely won’t get you first place in a bodybuilding competition, but Pilates can help develop a core strength that’s difficult to reproduce in other workouts.

“I teach some of the toughest push-ups in town,” Venier says. “If you are doing them correctly, they are hard!”

Maybe Pilates for guys sounds like a piece of cake…but what about your personal style? If you’re ready to overhaul not just your workout routine but your wardrobe, too, Style Girlfriend can help! Let a member of Team SG put together a personalized shopping plan just for you, your budget, and your body type.