How To Be More Confident With Women: Lessons from a "Black Mirror" Bad Guy - Style Girlfriend
Skip to content

How To Be More Confident With Women: Lessons from a “Black Mirror” Bad Guy

How To Be More Confident With Women: Lessons from a “Black Mirror” Bad Guy
On Positive Thinking, Attitude Adjustments, and Clones 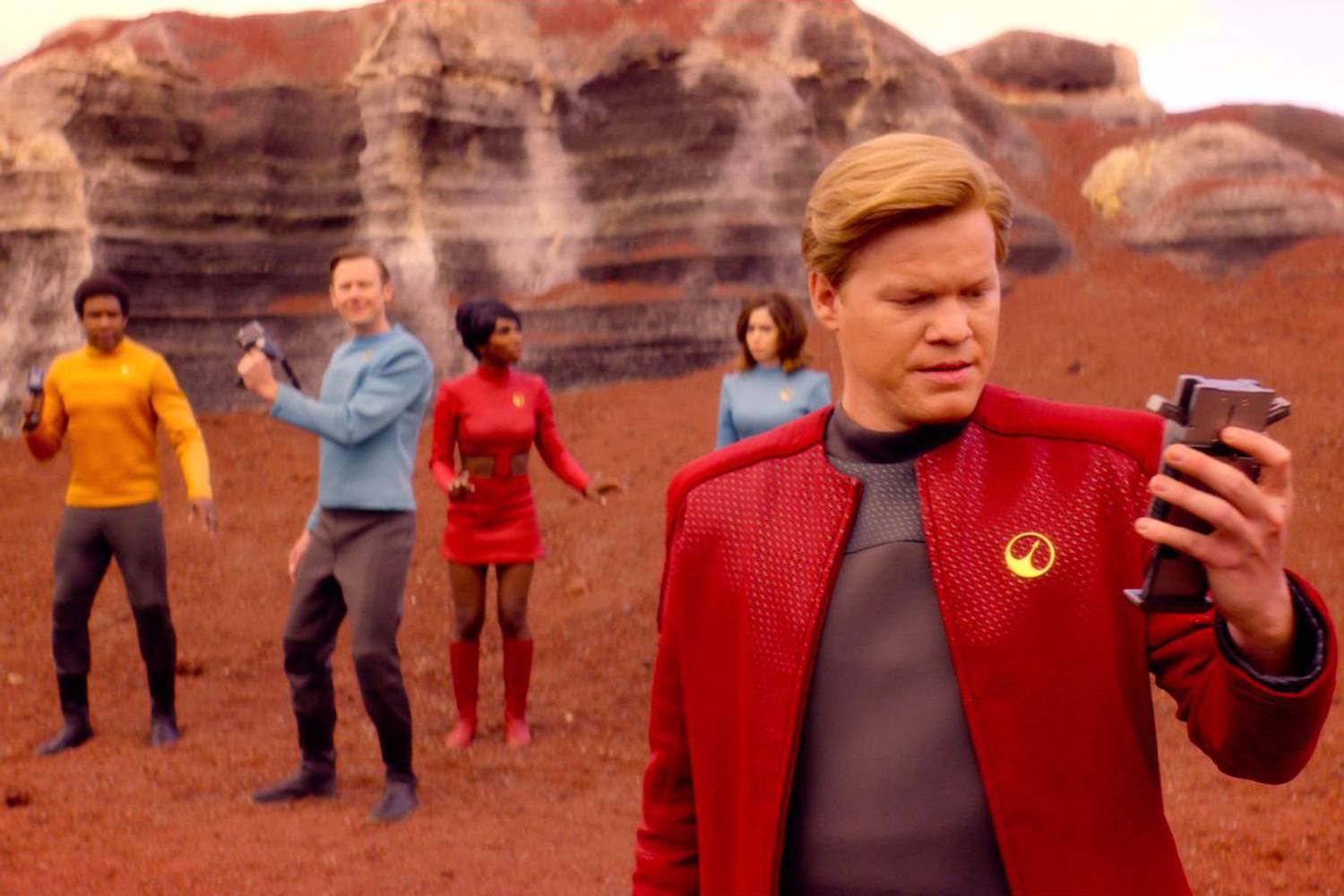 When the new season of Black Mirror premiered earlier this month, a flood of “Is technology ruining us?” think pieces hit the internet, but I’m pretty sure no one shared their hot take on how the sci-fi series can teach guys how to become more confident with women.

That’s about to change.

I’m a little late to the Black Mirror fan club but I watched a couple episodes with my brother-in-law over the holidays while my sister was at some wine night “bad mom’ing” with her suburb friends.

Shout out to Twitter, who collectively recommended “USS Callister,” the first episode of the new season, for its distinct lack of nightmare-inducing, tech-related terror.

The episode centers around a meek CTO (played by Friday Night Lights’ Jesse Plemons) who favors VR over IRL. Turns out, Plemons’ character has been—spoiler!—creating digital versions of his work colleagues and inserting them in his own spaceship-themed virtual reality game as his unwilling crew. Not cool.

As The Atlantic put it, the “nasty, winking twist of its set-up” comes from the disturbing reveal. This sad-sack protagonist, whom the audience is led to pity as a misunderstood nice guy, turns out to be an emotionally abusive, forehead microchip-powered asshole.

It struck me as I’ve been thinking a lot about the male power fantasy on display in this episode, specifically as it relates to style and confidence.

It’s a big reason for our renewed focus on Style Girlfriend about what it really means to live with style. The last thing I want is for guys to become more confident through improving their personal style, only to become total dicks.

Because no matter how great you look, you don’t get to kiss all the female space crew members you want, and you definitely don’t get to turn them into horrible space monsters when they defy or reject you.

In “USS Callister,” nothing changes about Landry (sorrynotsorry will forever refer to him and all FNL actors as their characters’ names) from the real world to the simulation. It’s not like the director filmed it six months apart so he could lose some weight, join Crossfit, and grow out a new haircut.

He changed his clothes—and that space suit was probably tailored.

So what changed? His confidence. The stories he told himself.

“I am a powerful captain of this ship.” “My team respects me.” “I am a leader.” “I am attractive to women.”

Was that any different than the real world? He was CTO of a bustling technology company. He’d captured the attention of The Mother, and managed a team that did his dev bidding.

In the real world, he told himself the story that he was a doormat. That women didn’t go for him.

What was his reality, then? That his co-founder walked all over him. That women warned other women in the office that he was “stare-y.”

So, here’s some advice on how to become more confident with women without stealing their DNA from a coffee cup to create hostage digital copies of them in your open-world VR game.

Four tips on how to be more confident with women:

1) Give yourself an attitude adjustment

When you assume others are acting in good faith, you’ll feel and act more confident. Plenty of guys go into interactions with women assuming the worst, and guess what winds up happening? Not fireworks, that’s for sure.

Look, we’re all guilty of externalizing our own issues and insecurities from time to time, but we can talk ourselves out of this negative behavior with some practice.

Here’s an example: I didn’t get to see my brother practically at all when I was in Wisconsin over the holidays. He was supposed to come to dinner the night before I left (fish fry, mmm) with his wife and their baby, but when I got to dinner, I found only my parents and aunt.

“Aaron couldn’t make it. The baby was being fussy.”

“He said maybe you could stop by after dinner.”

In fact, I had a big night planned of stopping at Culver’s for a concrete shake and finishing a 500-piece Beatles puzzle I’d started, while forcing my parents to binge-watch This Is Us so I could finally talk about how my mom is totally the Mandy Moore character with them.

My initial reaction was that my brother didn’t consider me a priority. Not, my brother is a brand-new, first-time father and having a baby you can’t soothe without holding doesn’t make for a fun dinner out.

So what did I do? Obviously I pulled strands of their hair out of a hairbrush and threw their clones into a video game simulation.

No, just kidding. I took a deep breath, texted him, and said, “No worries about tonight!” and promised we’d see each other again the next time I was in town. I realized that what I was feeling was about me and not him.

The takeaway: Before you approach a woman, check in with yourself about your attitude. Are you thinking, “This could be a fun conversation!” or “She’ll probably just turn me down.” Because how she reacts to you is going to be a lot better with option A than option B.

I have a friend (ahem) who seems to wakes up on the right side of the bed every day. The story I used to tell myself was, I’m just not like her. I’m the planner. I’m the worrier. What I realized is, I don’t have to hold onto that identity. I can tell myself a new story about who I am, and it can be just as true as the old story that I don’t get to be fun.

Every morning, you get to wake up and decide who you want to be. How you want to act. So look in the mirror and tell yourself…whatever it is you need to tell yourself to be that guy. “I am fun. I am confident. Women are attracted to me.”

Warning: it won’t work if you’re thinking to yourself, this is stupid the whole time. Remember, you’ve gotta make it ‘til you make it.

The Takeaway: Sometimes, feeling more confident is as simple (and as hard!) as telling yourself you’re a confident person. If one story can feel true (I’m worthless), then another can feel true, too (I’m awesome!). You just have to work at it. Remember: Don’t fake it; make it ‘til you make it.

I’ve spoken in front of groups a few times, and in researching techniques for handling nerves, I’ve found the same advice over and over: it helps to remember that the audience wants to be on your side.

They want to root for you! Think about it; what’s in it for them to be bored or disinterested? They’re already in the seats. That means you have them…right up until the moment you speak and your voice cracks. You start sweating, and all of a sudden, everyone’s uncomfortable and looking for the exits.

Look, I get it. Confidence can fly out the window when you’re nervous.

When I meet someone new, sometimes I act…funny. What do I do with my hands? How big of bites should I take of this salad? Am I making the right amount of eye contact?

Remembering that your “audience” wants to be on your side can help your confidence with women. I mean, GOD, especially women! We’re literally socialized to want to make everyone around us comfortable (for better or for worse). Don’t do yourself a disservice by assuming the worst.

I recently decided I’d like to learn to fix cars. Not because I have a car. Or have any plans to buy a car. I just like the idea of knowing how to tell an engine from my elbow.

When you feel competent, or effective, at a task or skill, it instills you with confidence. And I’m talking, stuff that has nothing to do with women (ugh, could you even imagine if I started laying down PUA rules? Barf). Knowing how to speak French, or solve a Rubik’s cube, or identify different bird calls boosts your sense of worth, and that kind of confidence is very appealing to women.

And just a heads up: there’s an argument to be made that having a working knowledge of a variety of things beats being a total master at one or two. Apart from whatever it is you do for a living, nobody really needs you to be that good at a hobby or skill. Meaning, beating every single Call of Duty in record time is less impressive than knowing how to roast a chicken.

It’s also true that when you feel a sense of imposter syndrome about something (I want to be good at X, but I’m just not), that can be a huge confidence killer. And it’s also true that the best way to get over that is to…get better at that thing.

The takeaway: To battle insecurity, work on becoming more effective in skills and habits where you’re currently deficient.